“Shoot anything that moves”. This simple formula has defined many successful shooters, from Doom to Unreal Tournament to Bulletstorm. Recently, more complicated gameplay mechanics have become prominent such as squad based play, tactical AI programs, and cover systems. CI Games’ Alien Rage completely forgoes most modern gameplay tenets in favor of simply blowing s*** up. But does it work? Is it fun?

You play as… well… actually I’m not sure what his name is, but he’s a space marine. In the distant future, aliens have attacked a human space mining operation and it’s up to you to wipe them out and defend humanity. It provides a thin thread to follow – expect to have little to no idea what’s happening.

The game itself consists entirely of linear corridor based shooting. Waypoints appear directly onscreen, and enemies charge towards you at predetermined points. It’s predictable to a fault, as I almost always moved forward enough to trigger a checkpoint, then retreated behind a wall to pick off the unintelligent enemies from relative safety. The shooting itself feels good – it controls tightly and has a decent sense of weight behind it. It feels very similar to Call of Duty, so anyone who has played those games should feel at home pretty quickly. The problem is repetition, as every level feels the same, has largely the same enemies, and the same goal (reach the end). With 14 levels, I would have appreciated a bit more variety to things. 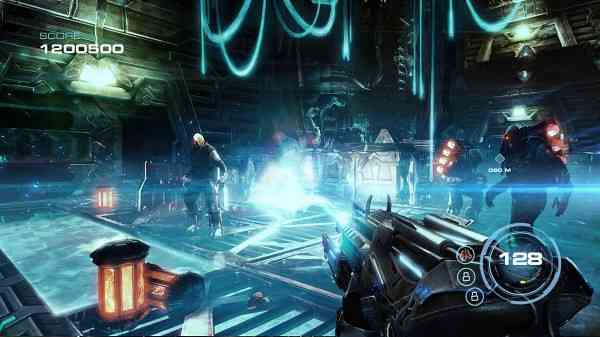 The game moves fast – think Unreal Tournament. It encourages you to run and gun your way through the hoards of faceless, mindless aliens, but the player character is about as durable as a bouquet of flowers. Enemies soak up mass quantities of bullets in their centre of mass, and a standard enemy will win a straight up firefight more often than not on the default difficulty. Then I stumbled upon a boss character – the ‘Centurion’. Run and gun resulted in a quick death at least 20 times, and the encounter demanded a methodical stop and pop strategy. I thought, what kind of game is this? After the Centurion, I started playing a more careful style. Guess what? I was far more successful. The game is completely confused at a base level. I get the sense that there were a few too many cooks making this soup – lots of ideas and potential, but a sad lack of execution and polish.

There are also a lot of little problems that irk me. Each level starts you off with the default weapon set regardless of what you were carrying on the other side of the door. Invisible walls and non-functional computers pop up frequently.  There are ‘hidden’ audio logs scattered around, but they require you to stand directly next to them while play. I could list more niggling problems, but I think that should give some sense of the lack of polish in the game.

Fortunately, the game looks pretty good. On the PC, it pushes lots of particles, the textures are sharp, and enemies animate nicely. What doesn’t animate realistically is the player character. Moving while crouching sways your weapon a good 45 degrees back and forth with each step – forget about trying to shoot anything while crouching. Animations are exaggerated in canned sequences too – the camera swoops and pitches to ridiculous angles when doing extreme activities like opening a door or tapping on a touchpad. 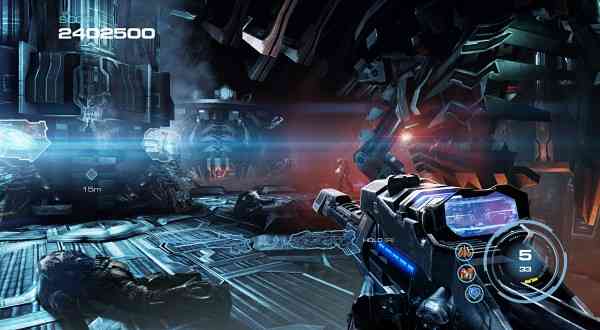 The futuristic setting is fairly believable, with an aesthetic somewhere between Mass Effect and Dead Space. It goes heavy on the lens flare and reflective surfaces. Bullet impacts on enemies result in little bursts of orange – they look cool, but it feels like the developers had a discussion along the lines of “hey, what if enemies bled orange? Wouldn’t gamers think that’s totally rad? YEAH! Rad!”

The music is a high point with an atmospheric and high quality soundtrack – it’s one of the things I noticed from time to time in a good way.

Multiplayer feels like an afterthought. It controls differently, and feels very disconnected. There’s very little in the way of sound effects, and the level design is very basic. It feels a lot like a Quake clone that has shown up 20 years late.

Alien Rage could have been a very good old school shooter a la Bulletstorm, but curious design decisions, poor execution, and a severe lack of polish mar the experience. The shooting itself is passable and the soundtrack hits the mark, but for $20, you’d be better off picking up a used copy of Serious Sam or Bulletstorm for a dose of absurd FPS action.