Unrailed! is Full of Charm, Super Weird and Hectic

Getting trapped in front of a moving train. Chopping wood until your fingers bleed. Yelling at your partner because you’re pulling all the dead weight — why, that’s just the sound of a good time! This is your life in Unrailed!; a brand new co-op game where you and your team must construct railroad tracks as quickly as possible in front of a moving train. Featuring only local and online multiplayer modes, this adorable Early Access title has all the simplicity and whimsy of Overcooked, without the story and campaign to push you along.

Both the gameplay and mechanics of Unrailed! have very little to them, and this is likely the game’s draw and its demise. You begin every round with a woodcutting axe, a pickaxe and a bucket. You must chop wood and mine iron in order to construct tracks, which occurs by bringing stacks of resources to a specific railcar that will convert the raw resources for you. You then must pick up the converted track pieces and lay them down in front of the moving train, and repeat until your train safely reaches the next station. Should the train catch up to you before you are able to lay new tracks, it will crash and derail, thus ending the game and sending you back to the beginning.

Some of the challenges of Unrailed! are posed by the environment, and others are simply based around your own physical speed, skill and efficiency. The artwork for the game is blocky and voxel, with bright colors being the main differentiation for objects around the map. The maps are procedurally generated, and the layout of the map is always something you have to pay attention to. It can be extremely easy to get trapped on either side of the train depending on the map, or caught between the train and some obstacles in the environment that force you to simply stand by and watch as the train derails out of your control. This is call for strategy rather than frustration, as you will eventually learn how to make appropriate space for both you and the train to pass through different areas of the map. Other obstacles in Unrailed! include the descension of night time cutting off the visibility around you, and the train constantly overheating and catching fire — which is where your handy water bucket must come in to save the day.

Between cutting down and mining resources, to stacking objects and carrying them over, to bandits stealing your loose resources and animals getting in your way, Unrailed! is definitely never easy no matter how low you set the difficulty. There is always something to be doing, and chances are you will never be doing it fast enough. 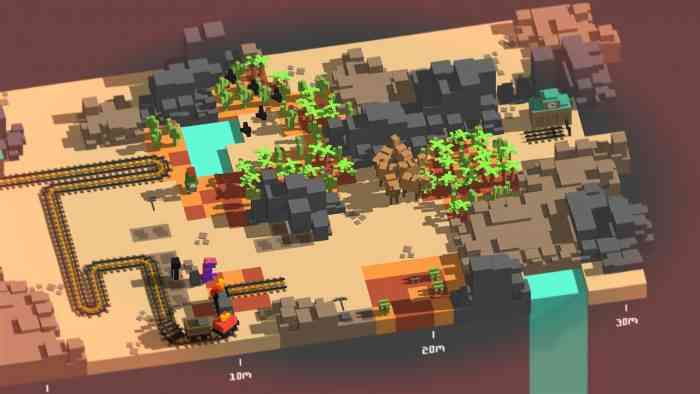 Unrailed! consists of three game modes: Quick, Endless, and Versus. Quick and Endless matches require a minimum of two people to play, while Versus games need at least four players. The Quick mode starts you off on one map with only one station to reach, and whenever you reach that station successfully the game ends. Endless mode is as it sounds — you keep advancing the train to as many stations as possible until you can’t survive anymore — and Versus is where two trains on two identical maps run alongside each other and different teams must race to reach the next station faster than the other.

My favorite of the three modes is definitely Endless, as it is the only mode in which you can add upgrades to the train and see all of the different scenery the game has to offer. Quick matches felt a little pointless to me since they take only a few minutes to complete (depending on fast you set the train speed/difficulty) and the gameplay is very rudimentary. In Endless mode, the train speeds up slightly every round, and you are able to upgrade your train each time you reach a new station using a currency called Bolts. Bolts can be earned by reaching new stations, tagging them in hard-to-reach places on the map, and completing challenges for each round such as having only one player touch the water bucket or not letting any bandits steal your resources.

Upgrading the train can be carried out in a small number of ways. You can either upgrade existing wagons to make them work faster or more efficiently, or you can add new wagons to your trains that offer different perks. Many of the new wagons are kooky and fun, and range from ghost cars that let you pass through them to get to the other side of the track to cars that take cows and milk them to give you strength. The train’s engine itself can also be upgraded, which not only changes the scenery of the map to different biomes such as deserts and tundras, but it also slows the train back down to its starting speed — a big plus when you get into the later levels of Unrailed!. I love the upgrade system, though I do question its role in the game’s longevity. After all, there are only a small handful of upgrades and new trains to be obtained, and once you cycle through these there’s not much to do other than keep building until you derail. 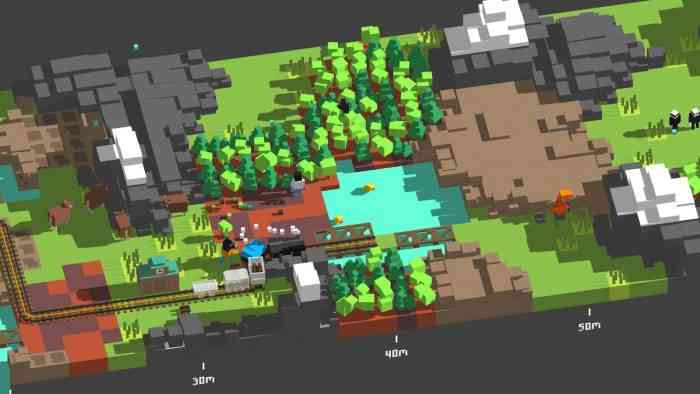 Longevity as a whole is something I worry about with Unrailed!. I enjoyed playing the game over and over again in Endless mode with my partner, but I wonder how long our desire to keep reaching for this game will last. On one hand, Unrailed! has the arcade draw of many games from days past where one basic premise and the physical challenge of getting better and lasting longer can entertain you and your friends for months on end, but on the other, its simplicity may be the reason it does not hold up for long in the modern age. There is no story to follow and very few modes to choose from, and only one really worth playing as even the Versus matches are just short bursts without much to it. The game doesn’t really pose any new challenges with every passing round aside from the train speeding up a little, and it never throws you through a loop the way games like Overcooked do. You can only unlock so many upgrades and perform so many different actions, and it won’t take long before you cycle through all of them.

In my time with Unrailed!, I found myself speculating that unless the full version comes out with new ways to shake up the gameplay and possibly add some new campaigns (including a single-player mode), it may not invite as much replayability as it has the potential to. Still, Unrailed! is full of charm and hilarity, and it’s basic enough that even the least experienced gamers can pick it up and participate. My partner and I truly did have a blast playing this cute little game, and I have high hopes for its full release out of Early Access.