The vein of nostalgia is something game devs love to tap. Throwbacks from everything retro have been done and then redone again. So whenever I embark on something new yet old and familiar, my question is always: what does this new spin bring to the table? Super Crome: Bullet Purgatory makes me ask this exact question.

And if there ever was a high-stress genre about threading the needle as a conceit, bullet hell games are it. But where games like Velocity and Enter the Gungeon twist, merge or reshape the genre, thus playing with your expectations, Super Crome: Bullet Purgatory (now in Steam’s Early Access) doesn’t have that new spin yet.

You know the drill. You are a tiny space jet with unlimited lasers and a few power weapons up your sleeve. The 2D map scrolls ever onward as enemies descend from above, spraying bullets that will kill you with one hit. You spray bullets back and try to avoid getting hit until you can’t avoid it anymore. Your lives tick down and then you start all over, hoping for a better score. 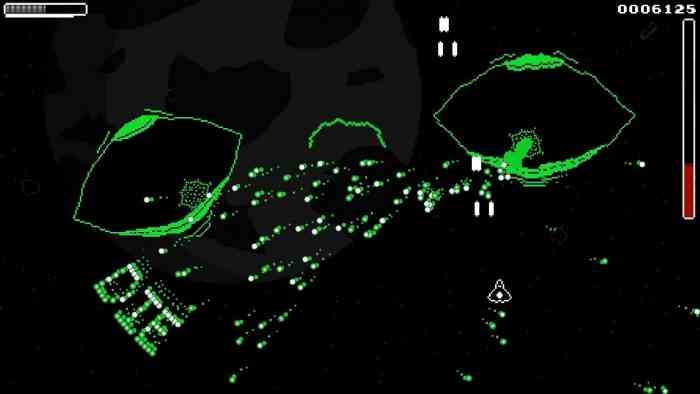 And Super Crome plays to that exact recipe. Some of the weapons have interesting mechanics, like the homing missiles that fire then track enemies, but it all adds up to a feeling of wanting more. The sound harkens back to the arcade machines of old, attempting to rekindle those old memories, but really only scratches them. And the ability to dodge, while providing nice empowerment to the player, doesn’t do much to change up the flow, even when you need to dodge through an asteroid belt.

So you shoot, dodge, switch weapons, and survive. And that’s pretty much it. Rinse and repeat. Everything feels competent enough but without any tension or twist to pull you in.

On the good side: Super Crome’s visuals pop off the black backgrounds, with bosses lighting up a fight like giant neon signs with attitude. Each boss, too, looks great and fights differently, adding some variety to each wave. I bet it would pop off an old CRT monitor if I still had one kicking around.

On the content side of this release, things are equally light at the moment. There is only a quick tutorial and the endless wave mode available now. If you’re pretty bad at these types of games like I am, you’ll spend the majority of your time in the early waves with the same types of enemies hoping for a glimpse of something fresh.

The Steam store page promises a story mode, a hub full of fun NPCs to chat with, and well, a lot more content, including more weapons and passive abilities with loadouts. And if they make good on their promise things could get more interesting but the core gameplay loop still needs time to cook.

What Super Crome has right now is a competent, if a bit rote, entry into the bullet hell genre. If Stumphead Games can not only add more to it but find their special take on it during development, then we might have a contender on our hands. For now, I advise to wait and see.

*** PC code provided by the publisher for preview purposes ***