They always say, never judge a book by its cover. The same goes for game trailers, but they certainly can catch one’s eye. Though I’d never been one for the builder genre, the wonderful trailer for Satisfactory did manage to perk my interest. That alone warranted a closer look, as the thought of playing a “work simulator” always seemed odd to me — why pretend to do work to relax? All that considered, Satisfactory sure looked like a lot of fun. So let’s take a look at what this early access game is all about.

Let’s start from the top: where are you and why? The ‘where’ is more of an ambiguous alien world, well one of three. Why are you there? That’s a little more straight forward. You are an employee of FICSIT launched down to the planet via a pod to collect resources, build some factories and send some of that sweet, sweet industrial production back up through a giant space elevator. Why? Honestly, I’m not 100% sure. The story is there but it doesn’t really get in the way of doing what you want to do. What I can tell you, though, is that by sending the resources up that ladder you unlock higher and higher tiers of equipment to make more widgets faster, and that’s always fun, right? Indeed it is.

No Harm, No Foul

So, you’re on an alien world setting up factories — isn’t that a little detrimental to the local flora and fauna? From what I can tell, there doesn’t really seem to be any environmental effects to what you are doing, aside from taking up space and the local wildlife that I zap with my space cattle prod, mostly in defense (or at least that’s what I’m calling it.) If you do, however, find yourself in some sort of moral quandary about building over an alien planet, extracting its rich resources and taxing the wildlife, I want you to remember one thing. It’s only a game. Yep, no actual alien planets were harmed, no lifeforms, nothing at all. We’ll maybe your wrists and possibly your eyesight, but that’s no different than in any other computer game. It’s a fun factory builder, not something that will make you feel bad. That’s what Twitter is for. 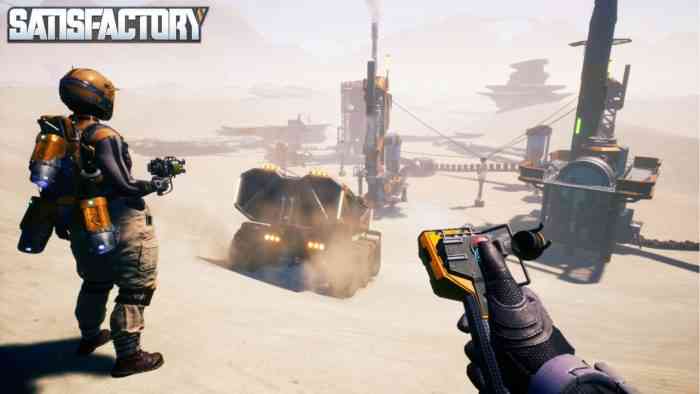 Now, with that question out of the way, how does one build factories to begin with? After your pod touches down on the planet of your choice, you set out armed only with a scanner for iron and your space cattle prod for protection. You need to build a hub of operations, but first you’ll need iron. After tracking some down and chipping away at it by hand you’re ready to place your hub at the site of your choosing. It all goes on from there. From smelting to producing steel plates or rod, copper wires etc, it is all up to your imagination. Here’s the good part though, you don’t particularly need a good imagination to get things done. I did mention that the story pretty much stays out of your way, which is true, but there is enough there to guide you on your way prevent you making a total mess of things. These types of games are often great for more creative types, and judging from YouTube videos out there already, there’s going to be lots of cool stuff being done by folks for a long time. But even if you are just a dullard like me, you won’t be left out of gameplay. 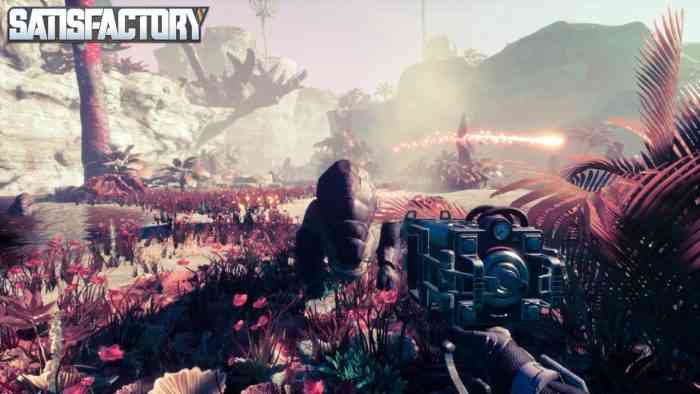 In my time with Satisfactory I did encounter a few hiccups here and there. That’s to be expected, though, at this stage of early access. Overall, however, it is fairly impressive and addictive. I’ve said before that this is a genre that has failed to capture my attention for long in the past, but that was not an issue at all here. It has been noted that Early Access could last up to possibly a year, but I wouldn’t let that run you off. It’s already really good. If you are even the least bit interested in anything this game has to offer, I wouldn’t hesitate to hop on board. Heck, even if you just want to try something you wouldn’t normally get, I’d still wholeheartedly recommend Satisfactory. By the time this reaches its full release I can’t imagine it not being one of, if not the top title in the genre. It’s probably up there already.

10 Minutes of The Best Moments From COD: Modern Warfare 2 Remastered
Next Etherborn is a Low Key and Relaxing Gravity Puzzler
Previous The Newest Elder Scrolls Online Chapter “Elsweyr” Shaping Into Best Expansion Yet