For over a decade, Tiger Woods has graced the cover of every EA Sports PGA Tour title released to date. Even after his 2009 cheating scandal, EA was one of the few companies who stood by their embattled athlete. In the years that followed the scandal, Woods struggled professionally and over the past two years wasn’t even found to be in the Top 100 highest earning golfers on tour. In 2013, EA announced it would be parting ways with Woods. Following their separation, EA opted to skip the 2014 season. After a year off, PGA Tour is back with golfer Rory McIlroy replacing Woods.

Rory McIlroy PGA Tour (PGA Tour) marks the series’ first release on the PS4 and Xbox One. The new game has been rebuilt from scratch and now runs on the Frostbite 3 Engine, which also powers the Battlefield and Need for Speed series. While the environments won’t be completely destructible, the Frostbite 3 Engine offers the series several new features not seen in past titles. The game can now load an entire course at once thereby reducing the loading times between each hole. “Invisible walls” no longer exist as players can now shoot the ball outside the hole they are playing on. The new engine also provides improved ball physics that allow the ball to interact more realistically with vegetation such as trees and shrubs. Not only that, but each course plays differently based on its length of grass and firmness.

PGA Tour offers players three different swing styles: Arcade, 3-Click and Tour. Arcade is a throwback to the old school days where players can use the analog sticks to swing and control the spin of the ball in mid-air. 3-Click was present in past PGA Tour games, but is harder to master as you cannot add power and spin to your shot in mid-air. Tour swing mode is considered the “Authentic Way to Play”. It takes your backswing length and front swing speed into account and does not allow you to zoom in on the green. 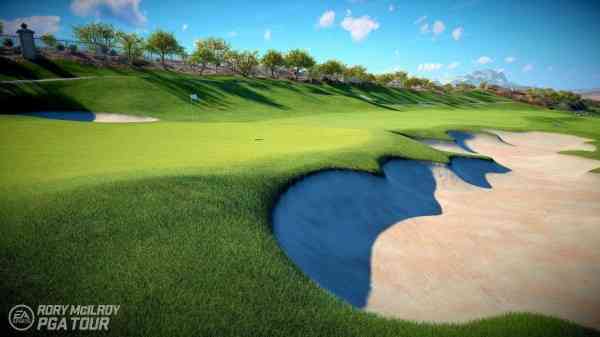 A new mode called Nightclub Challenge drops the player in a nightclub themed course to hit various targets. At launch, the game will ship with 8 courses and 12 professional golfers, with more to follow as DLC. Yearly releases will be a thing of the past as EA has announced that they will be treating PGA Tour as a platform similar to its other sports title UFC. EA intends to support PGA Tour with regular content updates, some of which will be free.

“It hasn’t been confirmed as to whether randoms from the crowd can shout “baba booey!” after you complete your swing.”

PGA Tour will also feature colour commentary provided by Rich Lerner and Frank Nobilo. It hasn’t been confirmed as to whether randoms from the crowd can shout “baba booey!” after you complete your swing.

It is disappointing that the game will feature fewer courses that past titles and that Augusta National will not be available at launch. Even with these omissions it will be interesting to see if the promised DLC can hold an audience months or even years after launch.

Rory McIlroy PGA Tour is set to release on July 14 for the Xbox One and PS4.