Take one part Norse mythology, one part pop-culture references, and drench liberally in strong beer. What you have is the essential mixture of Shield Break Studio’s new team-based multiplayer game, Bierzerkers, which just entered Steam early access. Shield Break is a new studio formed from members of a whole bunch of big game studios; Blizzard, Activision, and Riot Games to name a few. Mentioning credentials like that can’t help but raise some expectations in gamers. Those are some big names, and big shoes to fill, ya know? Well, I’m happy to report that they seem to be making good use of all the talent they’ve acquired.

Bierzerkers is Shield Break’s attempt at an arena-combat game in the vein of Team Fortress 2. There’s a lot to differentiate it from what TF2 is doing though. The game plays from the 3rd person perspective and places a great deal of emphasis on traversal. Most classes have a skill that can move them around the map fairly quickly, often doing damage at the same time. Quick map traversal is something I welcome. There’s nothing worse than respawning and having to walk for a minute or two to where the battle is taking place simply to die again. That’s frustrating and Bierzerkers sidesteps it.

The game takes place in Brewhalla, which is their version of the Norse afterlife; it’s a brutish place, inhabited by the games five current classes: The Raider, The Huntress, The Scoundrel, The Brewmaster, and The Valkyrie. They’re grouped into the three categories you’d expect: Offense, Defense, and Support. Which translates to your DPS classes, your healing classes, and your alter-the-battlefield classes and they all play an important part in making a solid team. The early access ships with these five classes and two game modes (King of the Hill and Deathmatch) but the devs are planning on adding more over the course of the beta. They’ve even got mockups for an additional four classes on their blog.

“There’s something about seeing a 400 pound Viking do a keg stand in the middle of a battle or having a fat opera-singing Valkyrie sing “Shiiiiiiit” as she throws down a wall for protection, that never gets old.”

The game is quite fast paced, which in its current early access state, can lead to a little bit of jank. Some attacks that probably should have connected seem to whiff, and textures sometimes disappear randomly. These things aren’t common though, which is a really good sign considering how crazy the battles can get. There’s no reason to believe that these things won’t get fixed in upcoming patches; the devs seem committed to making Bierzerkers a polished game.

If the game is lacking in any areas, style isn’t one of them; it’s simply gorgeous. They mention TF2, and Pixar movies as influences and it shows. The maps and characters glow with color and life that most games could only hope to realize. Everything animates incredibly smoothly and clearly telegraphs what skills the characters are using. I imagine the animations and models will get a few more layers of polish before the games final release too. Oh, and the game is genuinely hilarious. There’s something about seeing a 400 pound Viking do a keg stand in the middle of a battle or having a fat opera-singing Valkyrie sing “Shiiiiiiit” as she throws down a wall for protection, that never gets old. The characters are throwing out beer puns, and hilarious pop-culture references all over the place. It’s madness in the best possible way. I caught myself laughing out loud multiple times during a match out of sheer ridiculousness of what was happening and what the characters were saying. I hope more dialogue is added regularly because some lines were being repeated and I could see that getting annoying. 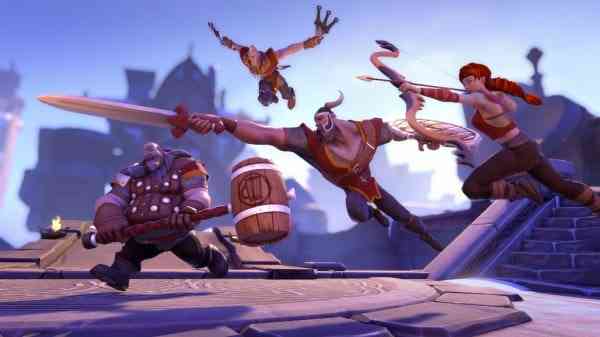 It’s worth mentioning the areas of the game that the devs are planning on fleshing out for the final release. They’re working on adding an equipment and leveling system to help differentiate characters from one another, which is great. More character, in a game already rife with character, is totally fine with me. I get the impression that the equipment will be completely cosmetic, but if the devs could work in unique weapons (a la TF2) the game could head in some truly interesting directions.

Overall, Bierzerkers is off to a strong start and is headed in the right direction. The devs seem to know what they want to do with the game in the coming months so the only question is whether they will deliver on those promises. Look for our review when the game launches proper in the coming months. Cheers!