Metal Hellsinger, from developer The Outsiders, beckons FPS fans and metalheads alike. Sound familiar? With Metal Hellsinger, The Outsiders have unashamedly paid homage to iD Software’s Doom Eternal in almost every aspect, albeit with the added twist of killing to a beat. Rhythm shooters are a recent niche with which I’ve admittedly spent little time. Metal Hellsinger immediately informed me that I’ve been missing out. In laymen’s terms, it kicks ass.

You inhabit the role of “The Unknown,” a demon gunslinger on a quest to reclaim his stolen voice from the ruler of the Hells, the Red Judge. Between you and the demonic thief stands an army of hellspawn intended on tearing you to shreds. Fortunately, you’re granted an array of hell’s finest firearms to end them to the tune of ripping guitar solos and breakdowns.

In the demo, I got my hands on the sword, flame-spewing skull, shotgun, and dual hand cannons. I spent the least time with the sword and skull, but each weapon caters well to particular enemies and environments. The BPM of each level’s song is displayed across your crosshairs, assisting you in aligning your trigger pulls to the beat. Once you get into the groove, it’s a lot of fun to feel one with the song as you shoot, reload, dodge, and perform finishing moves on enemies. Enemy variety is relatively diverse from start to finish of the demo level, offering interesting encounters up until the boss who challenges you to combine all you’ve learned up until that point. The final game will feature eight total levels, with replayability encouraged by multiple difficulty levels and a challenge mode with leaderboards. 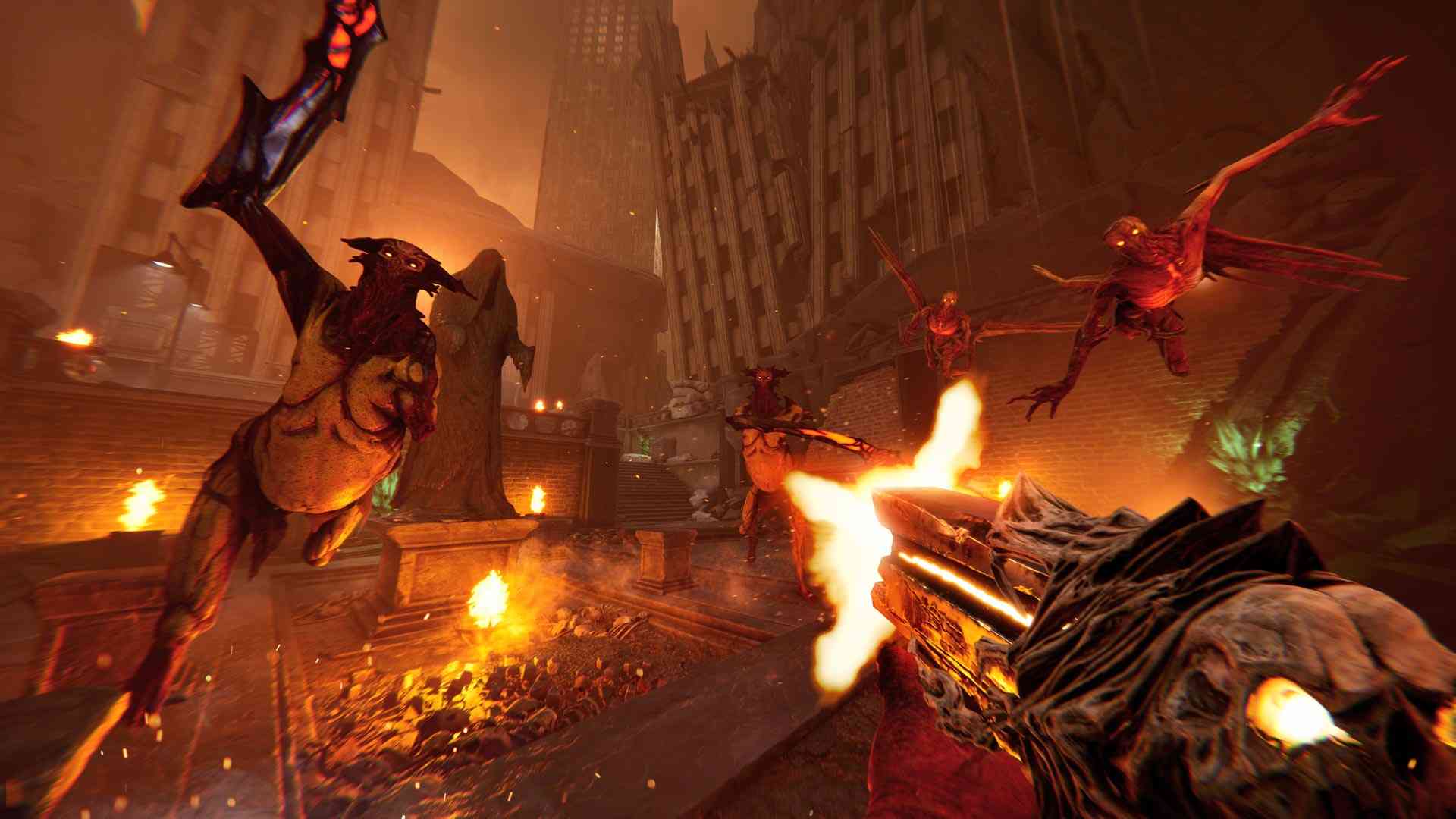 One of my favorite aspects is how the intro, verses, choruses, bridge, and outro transition based on which portion of the level you’re in. It’s also sick how the music adapts and gets heavier when you perform well. The song in the demo features Alissa White-Gluz of Arch enemy on vocals with music by Two feathers. It slaps. I’m stoked to hear other tunes with artists like Randy Blythe from Lamb of God and Serj Tankian of System of a Down. The main cast includes Troy Baker as The Unknown, a demon with Joel Miller’s voice, and Jennifer Hale. 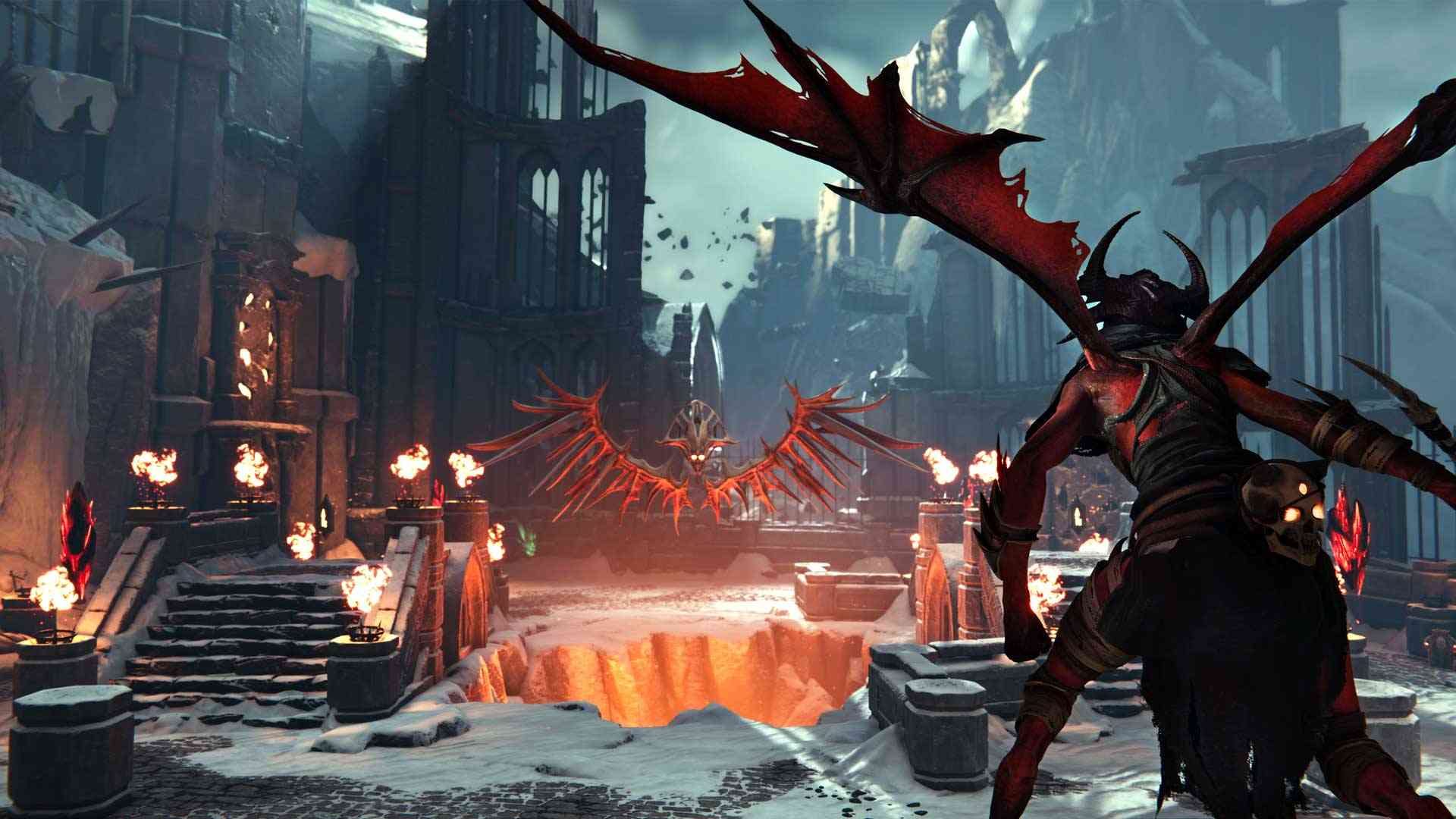 The performance is a bit underwhelming. Shooters generally require a stable frame rate, but it’s especially critical in a Rhythm game. I play on a pretty powerful PC and regularly experience frame drops. I tried a run on significantly lower settings with a minimal performance improvement. The Outsiders have expressed that the demo is not the finished product. It’s safe to expect performance to become more stable between now and its undetermined 2022 release.

Metal Hellsinger’s one demo level has excited me for the remaining seven. I’d chalk it up to a Doom ripoff if the rhythm mechanic was absent. However, The Outsiders have poured a lot of heart into this project. It’s bound to impress fans of similar games when it launches on PS5, Xbox Series X, and PC this year.