Hacking, it’s something that has been depicted in countless mediums and video games are no exception; but rarely do we see games where hacking is the pillar of all its gameplay. Most games use hacking as the modern equivalent of lock-picking or as a cheap plot device. Independent titles such as Uplink, Hacker Evolution and now, Hacknet are challenging this, and turn hacking into the gameplay.

From the very start, Hacknet is very clear in its objectives but vague with its intentions. You receive a message from an anonymous user that states “If you are reading this, then I am already dead.” The cliché sentence makes for a decent enough mystery, but you will be less focused on that when the game begins.

Your keyboard is your friend. Typing is 95% percent of what you need to do in this game and you will be doing lots of it. If you’re like me, you will be typing in the very useful “help” command a lot, so you can remember which commands do what.While I assume that Hacknet is much more forgiving than real hacking, it does still require you to recall specific commands and programs if you want to succeed any goal in a quick fashion. There’s a learning curve, but it’s far from insurmountable, and the game actively encourages you to improve in your recollection.

Each mission gives you a list of hints and objectives that will display on the side of your screen, but leaving these on takes up RAM on your computer, RAM that may prevent you from running other important programs if too much of it is used. For more complicated tasks, you may even feel tempted to write things down on notepads to assist you and allow you to use your in-game computer’s RAM more efficiently. What’s unique about Hacknet is that it’s a platform for this kind of alternate reality style of gameplay, where writing things down on your notepad actually improves your immersion. 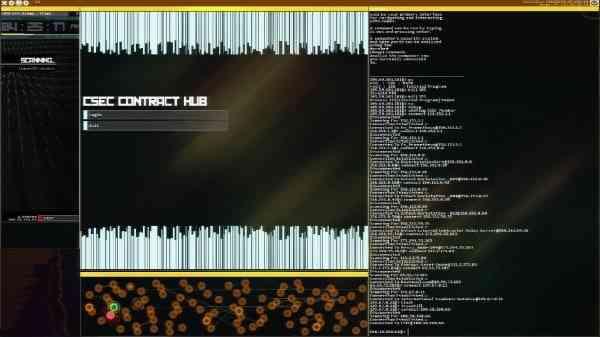 And when the game displays intensity, it does not let up. Loud, aggressive but catchy electronic music, combined with flashing menus and a blood red filter progressing down your screen, makes for a game with much more tension than you would expect. The game is stylized in areas, but not so much so that it compromises the authenticity.

Players who enjoy investing time into a video game and earning your accomplishments should give this game some attention. It’s exactly the sort of design that calls for learning from experiences you form during gameplay. While you may be constantly accessing the “Help” page and re-typing commands because you got one letter wrong, you quickly overcome these challenges and will begin to feel empowered.

Releasing on August 12th, Hacknet looks very promising and should not be ignored by those looking for a unique and challenging experience that will tax their wits much more than your average video game.