Good Company is Adorable But The Machinery Management Needs Work

It’s been a little while since I’ve found a management game with a fresh and intriguing approach, which is why I saw so much promise in Good Company, a tycoon game launching into Early Access where you establish your own corporate machinery empire. It’s a polished game with a soft style that’s easy to adore, but in nearly twenty hours with the game, I found that it still has a way to go before it lives up to its full potential.

There Goes The Neighborhood

In Good Company, it’s your task to bring hope to your hometown in Good County, where big corporations have displaced all the local industry. Citizens are in need of jobs and brighter futures, so you begin by creating your own boss character and heading out to revive the local businesses and establish new industry in the town. You can choose right away between Campaign Mode and Freeplay, but even those who are highly experienced in management games should probably start with the Campaign to learn the mechanics. Though Good Company looks simple enough, the gameplay is unlike any other management game I’ve played, and the learning curve felt oddly steep at times.

In Campaign Mode, you begin your tycoon journey by learning how to make calculators out of your dad’s garage. Each worksite has an already-established Incoming and Outgoing Zone, but everything else will be up to you to construct. You can craft basic modules such as batteries, circuits, cases or displays at Tinker Tables, using supplies purchased from the Incoming Zone. Once you finish crafting a module, it can either be sold straight through the Outgoing Zone or placed onto a shelf for future use in more advanced components or products. Calculators will be the first product you learn how to build, but later on you’ll make everything from game devices to robots. New products can be imagined at Design Tables, manufactured with different modules at Assembly Tables, and then sold through the Outgoing Zone. Each product needs specific parts in order to be constructed, which is where your challenge of creating smooth and efficient pipelines comes into play. 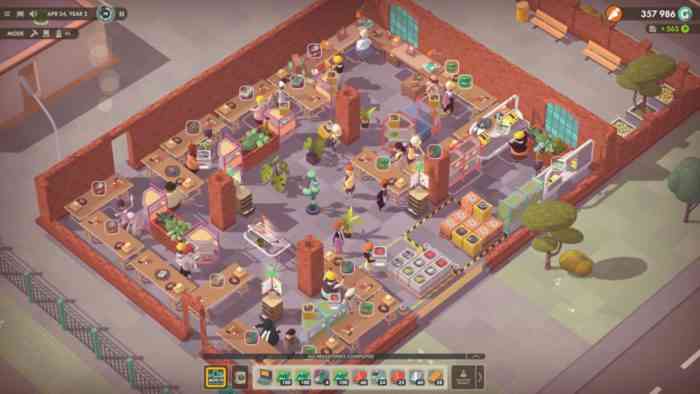 One of the most defining characteristics of the gameplay in Good Company is the click and drag mechanic. All resources, products, and items must be clicked and dragged to their next spot according to the purposes they serve, or you’ll experience a standstill in the game. For example, you’ll need to go into the game’s “Logistic Mode” to click and drag a supply from the Incoming Zone onto a Tinker Table to create a connection, then connect the completed module to a shelf, then connect the module on the shelf to another Tinker Table or Assembly Table, and finally connect the finished product on that table to the Outgoing Zone (or another shelf, depending on how far along in the process that item is.) If it sounds like a lot already, that’s because it is. Almost the entire challenge of the game is managing these Logistic connections and ensuring they all make sense and flow properly, and it gets more and more difficult to get the hang of the more you unlock and the more complicated your recipes become.

There are many different types of tables to unlock; most of which can either construct new types of items or produce already-discovered items faster. In addition to the large selection of workbenches, you can also construct Research Tables to carry out the discovery of new and improved parts. As you progress with research, you also have to pay attention to the Market, which advances over time and raises the expectations for your products. This means that you cannot get by just selling basic calculators forever — you’ll have to research new technology and design new blueprints to match the demands of the Market. 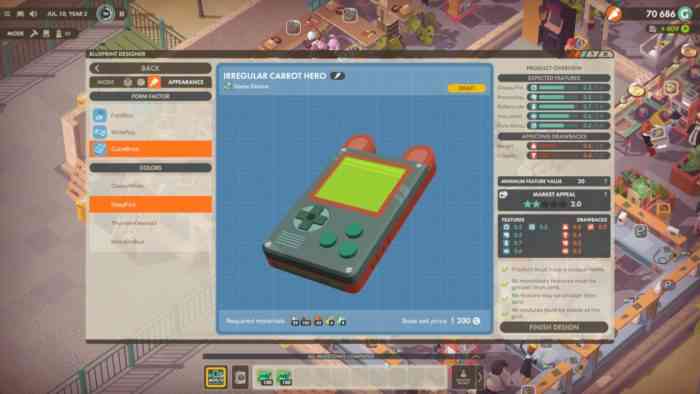 Another defining characteristic of Good Company’s gameplay is the focus on the boss that you manually control. In most management games, you play as an invisible force from above who clicks around and makes decisions that employees carry out, but in Good Company, you control a boss who is physically in the building. The camera cannot move independently from your boss, nor can you pull up info tabs outside of the Logistic Mode if your boss is not physically in front of the space. If you’re trying to do something as simple as clicking on a workbench to see what resources it needs or ordering supplies from the Incoming Zone, you have to manually walk your boss over to the workbench or zone to pull up these tabs. I like the concept of controlling a boss I can actually see and being able to roll up my sleeves and craft at a table if my workforce is too small, but I really disliked that the freedom of the camera was constricted by the slow walking pace of my boss.

Cogs in the Machine

Good Company succeeds conceptually with its fresh approach to management gameplay, but it has a few glaring shortcomings that I hope to see improved by its full release. First, the employee system in its current state is extremely shallow. You can hire employees to perform every task in your operation, but individually, they don’t seem to matter at all. When you initially hire employees, they have both a daily salary and a one-time hiring fee that vary from character to character. I saw no noticeable difference between employees with lower daily salaries and their higher-earning counterparts; everything from movement speed to production efficiency seemed to match up. If there is, in fact, a significant difference or an incentive to hire more expensive talent, it goes completely unexplained in the game. 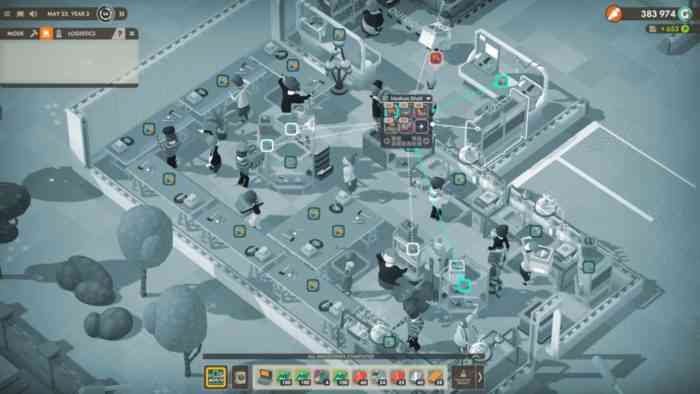 Unfortunately, employees lack individual personalities and skills, and there is also no way to train or promote them. Every employee is the same as the next, and they will all go about their work the same exact way. You can’t research upgrades to improve their walking speeds, production speeds or outputs, nor is there any employee morale system, and it feels like a downright missed opportunity.

Another major aspect I found to be missing was a decent Employee Tab, for the existing one is completely minimalist and offers no useful information at all. Perhaps I missed a tutorial or explanation for this, but I never found a way to see the individual wages of my employees once I hired them, which seems like a huge no-no in a world where data, numbers, and micromanagement are typically the backbone of the entire genre. I also had a hell of time figuring out which employees corresponded to the workbenches I assigned them to: Under each employee’s individual tab, there is an unlabeled picture of their assigned post you can hover over, but when you have twenty different Tinker Tables, hovering over the picture to see which exact Tinker Table they work at seems like the least effective way to manage. I’m not sure why information such as wages and assigned worktables aren’t given upfront or are missing entirely, but it’s possible the developers will expand on this later.

Good Company is a polished, playable game with a solid concept, but it feels as if certain limitations force the gameplay to be overly complicated. Certain issues I ran into while playing, such as employees standing around because the Outgoing Zone was too full — despite having plenty of empty slots available — were problems I never found a solution for. The lack of in-game explanations for pipelines issues made it so that I either never figured out where I was going wrong, or it took me hours to solve. 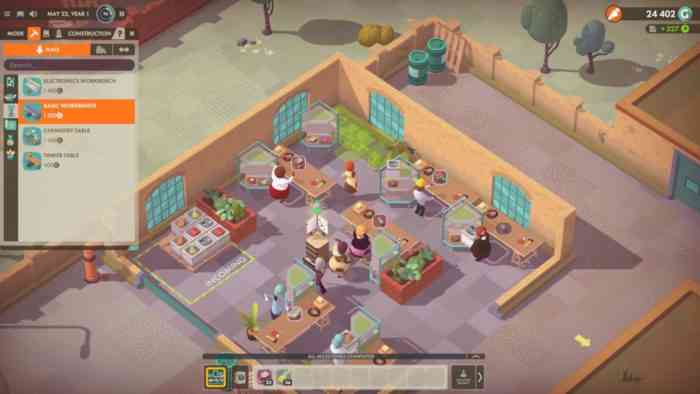 I absolutely loved the toony, minimalist feel of the artwork, the customization in small things such as the ability to change the color of your shelves or the outfit of your boss, and the soothing, non-invasive soundtrack that bumps in the background. The connection between your physical character and the building you are managing also adds a very personal touch that management games usually skip over entirely. More overlays and info tabs would be nice for players who love to get into the analytic side of the genre, and hopefully, we will see more impactful additions to the full release such as employee morale, personalities and skills or even workbench upgrades. Overall, I desperately want to love Good Company and find myself still reaching for the game even though certain systems deserve to be elaborated on. It definitely has all the makings of a fantastic management game, and I hope to see it eventually reach its full potential.