Frank Herbert’s Dune books might not have inspired as many movies and games as Star Wars, but they could be a close second. Every generation tries to capture the essence of Herbert’s world. It’s a tall task. Dune is heady stuff, a melting pot of science fiction, politics, spirituality, and family drama. Poised to release into early access is Dune: Spice Wars. It takes a strategy game approach, emphasizing not just exploration but the politics of Spice.

The Ecological Politics of Spice

In a lengthy 1980 essay in Omni magazine, Herbert explains the genesis of Dune. The early 60s — when Dune was conceived — was, of course, a historically chaotic period. Herbert said that “Demagogues, fanatics, con-game artists, the innocent and the not-so-innocent bystanders-all were to have a part in the drama.” The newly emerging ecology movement played a part. It’s pretty evident that Spice is a stand-in for oil. Finally, Herbert said that Dune is a cautionary tale about leaders .”Don’t give over all of your critical faculties to people in power, no matter how admirable those people may appear to be. Beneath the hero’s facade, you will find a human being
who makes human mistakes.”

Dune: Spice Wars does a pretty good job of emphasizing the political intrigues and conflicts suggested by the books. Described as an RTS with 4X elements, it leans a little more into the latter. Dune: Spice Wars alternates between the explore, build and defend aspects of real-time strategy and the backroom politics and alliances of 4x games. 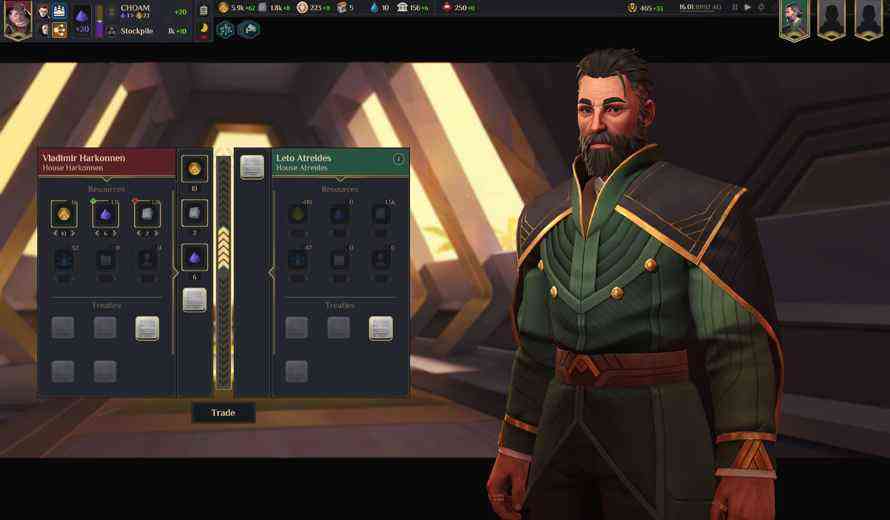 Dune: Spice Wars is still missing a few key features at this stage of development. There is no proper campaign or tutorial, though there are plenty of tooltips to guide players along. Absent features aside, gameplay mechanics are straightforward. You pick a faction — Atreides, Harkonen, Fremen, or Smugglers — and two Councilors, many of whom appear in the books. Each faction naturally has bonuses, like extra military units or cheaper spice production. The starting map is shrouded mainly by a fog of war or, in this case, clouds of sand. You send out an ornithopter to scout for spice fields and other resources.

Spice fields are usually controlled by a settlement, and depending on your faction; you can choose to attack it outright, capture it by subterfuge or negotiation. There are lots of complications along the way, like sandworms. The environment is harsh, so your troops may perish over long treks. The day/night cycle impacts exploration and enemy encounters. You need to pay taxes and bribes. Of course, you can align with other houses for your own benefit and against others.

Though Dune: Spice Wars is not a full-fledged, classic RTS game like Age of Empires, there is unit and building construction and a deep upgrade path that allows the player to focus on different aspects of strategy. 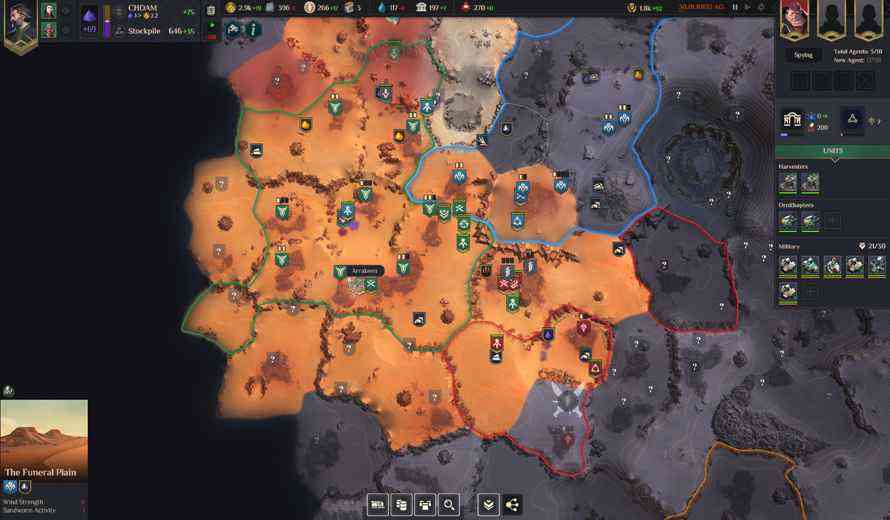 Hints of What’s to Come

Players coming to Dune: Spice Wars expecting the visual detail of the recent films or other RTS/building games might be disappointed by Spice Wars’ graphics. They’re evocative but pretty straightforward. Arrakis being a desert planet, there’s a lot of red, tan, and brown. Units and buildings are stylized and not to scale. Skirmishes play out in real-time, but the units themselves are relatively basic and not terribly interesting to look at.

The faction leaders are animated and voiced caricatures. They provide a welcome bit of detail and personality. They look good, close to what you probably imagine from the book’s descriptions. On the audio side, Dune: Spice Wars is currently a bit underwhelming. The vaguely Arabic-influenced ambient music is mostly synth textures and unobtrusive, providing a bit of atmosphere and tension. Unit sounds and environmental audio seem to be a work in progress. Technically, this early access build has some bugs to eradicate. 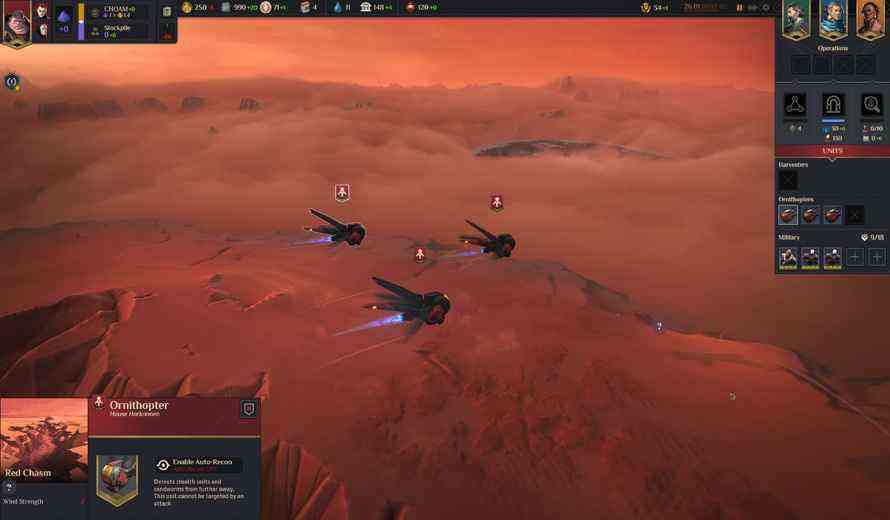 Like it seemed from the hands-off preview I saw a few months back, playing Dune: Spice Wars focuses on aspects of Herbert’s novels in a unique way. It’s a decent balance between real-time and 4X strategy, and players who are into political machinations will enjoy it as much as those into military conquest. I look forward to seeing how the single-player campaign develops, as well as a more thorough tutorial and multiplayer skirmishes. The beauty of Dune is how rich it is. Whatever you’re looking for, it’s probably in the books. Dune: Spice Wars feels like a natural fit for Herbert’s complex material and world. 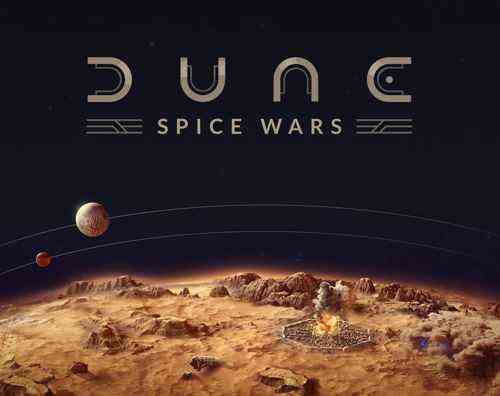