Blaze Revolutions is an upcoming base building and real-time strategy game where you harness the power of hemp to stage a revolt against a totalitarian corporation that’s taken over the world. I’m a sucker for a good base building game, and I was intrigued and excited to try Blaze Revolutions for its colorful artwork and appealing strategy and building elements. In an Early Access preview with the game, however, I found that while I’m still rooting for it to improve and succeed, Blaze Revolutions feels misleading and weightless in its current state.

Keeping Up With the Blazes

In Blaze Revolutions, we play as revolutionaries Janet and Winston Blaze, the children of an infamous botanist who’s been captured by the evil corporate antagonist, SomaCorp. The world as Janet and Winston know it is a futuristic bleak one where pollution and misinformation spread at the hands of SomaCorp. The entire population experiences life almost completely through virtual reality, and it’s the Blazes’ mission to use cannabis to free the minds of all the citizens and revolt against the oppressive corporation that’s monopolized the world.

To form the industrial revolution, the Blazes must take over different city parks and set up self-sustaining communities with facilities like hemp farms, hempcrete factories and even coffee shops where people can hang out and light up. In addition to building these facilities and producing cannabis goods, they must also gain followers by sharing “Liberty Weed” and rescue important individuals who have questioned or opposed the status quo. 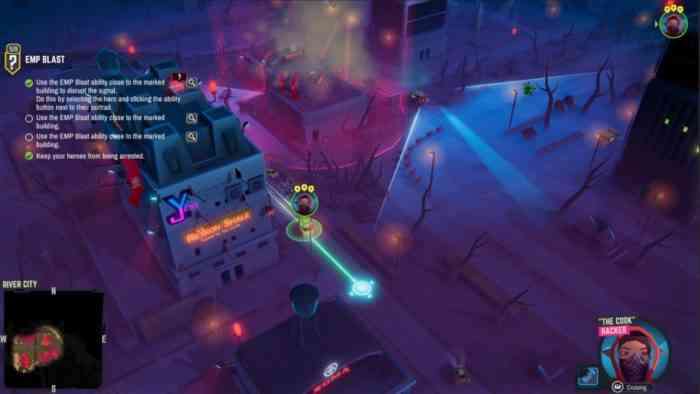 One of the main gameplay elements of Blaze Revolutions is the unique driving mechanic. Rather than playing God and simply managing things from a top-down perspective, our heroes are actually a controllable part of the world. You drive around the city as one of the Blazes by hovering over roads and areas and clicking to create a path for their car. In most places, there are SomaCorp patrols in the form of helicopters, drones and police cars, as well as roadblocks you either have to sneak through or navigate around. Driving the car around feels like a Grand Theft Auto-esque puzzle, where you have to plan and time out your route to avoid patrols. You accrue Wanted Stars when you’ve been spotted or when you’ve hacked an important SomaCorp building, but you are able to drive into many safe buildings to hide from the fuzz and lose your wanted level. Each character also has their own special driving ability, such as setting off EMPs around patrols, buildings or roadblocks, or throwing parties in the street to attract more followers.

While all of these core elements sound promising on paper, it’s almost misleading to point some of them out. I touched on the base building component already by mentioning that you must take over parks and set up cannabis farms and communal facilities, but in reality, this is a shockingly minor part of the game. Considering how essential base building and strategy is to the story and the overall point of Blaze Revolutions, my expectations were totally misguided — at least for the first few hours of the game. I’ll explain:

Blaze Revolutions describes itself as a base builder and real-time strategy game, yet you don’t even unlock base defense until Chapter 7 of the campaign. Leading up to that point, there are only fleeting base building moments that take place in different areas of the city every time, and always get interrupted by the narrative after a few buildings are placed. It’s difficult to care about the building element when you rarely see the same base twice, and you aren’t really given the freedom or time to build extensively until around Chapter 8. 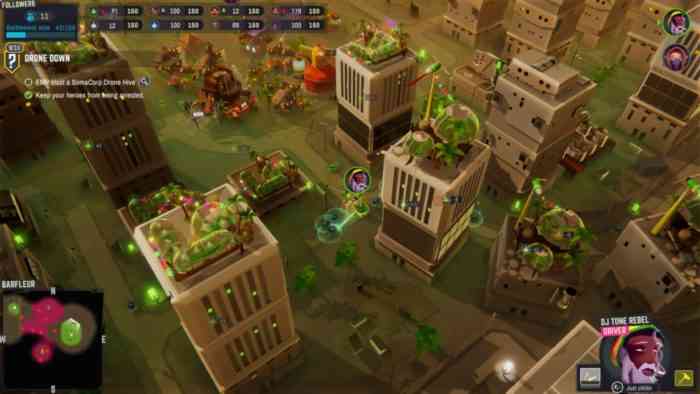 Instead of base building or engaging in any sort of strategy gameplay whatsoever, you spend the insane majority of your time driving around, and while it’s definitely a cool mechanic, it’s unfortunately done to death. The first two chapters of the game, excluding the tiny building tutorial you get at the beginning, are solely dedicated to building up the story, which is done by driving from place to place and escaping SomaCorp at every turn. After the first few chapters, you are given brief base building tasks here and there, but they are always sandwiched by heaping stretches of driving.

For the most part, I saw the driving stages as little more than a point-and-click adventure, or bluntly, a glorified e-book. It’s a mechanic that’s relied upon to push the story forward, and ultimately, your actions have no consequence. You can reach the maximum three-star wanted level and enter a building with a crowd of patrols right on your tail, and still get away scot-free every single time.

Driving isn’t the only example of weightless gameplay. The rest of the game feels way too easy, with the only caveat being the unforgiving checkpoints that send you back absurdly far when you fail a mission. During base building stages, there are three different interactions that can be performed with city buildings around the parks: Liberating, scavenging, and hot boxing. Scavenging rewards you with materials, hot boxing grants you the ability to build production facilities on the building’s rooftop, and liberating has you throw parties in apartments to convert residents into revolutionaries. At least in terms of liberating, it seems there should be some risk involved — even with SomaCorp patrols right outside the door, you can throw bass-bumping parties and still have a 100 percent success rate. In a world under such strict totalist enforcement, this just doesn’t add up. 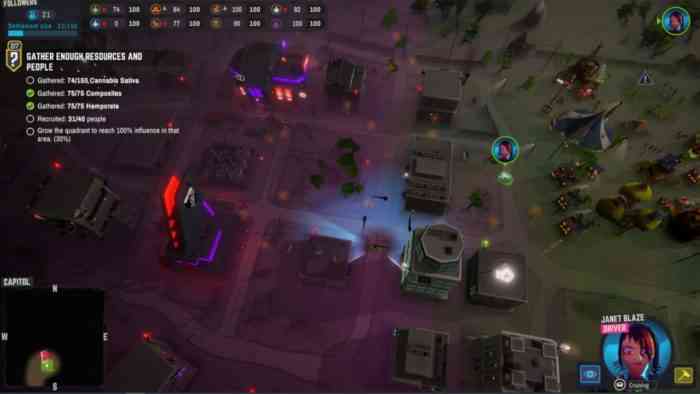 Perhaps criticizing the ease of gaining followers seems nitpicky, but it’s a microcosm for how everything in Blaze Revolutions is as easy as clicking and receiving. There’s no real strategy involved in almost anything; not even in resource management or production. Sure, sometimes you’ll see that you’re not producing hemp as quickly as you’re consuming it, but an issue like this is as easy as just building another farm and calling it a day. You’re not even going to have the opportunity to run into this issue until the later stages of the game, because as I said before, the story always rips you away from your base before something like a production issue can even occur.

Half-Baked With Room for Improvement

Though I do have a handful of complaints about Blaze Revolutions’ pacing and I feel the narrative is a bit gimmicky and unoriginal, there are certain aspects that I really liked. The artwork of the different farms, production facilities and buildings you can place are colorful and nicely designed, especially when you zoom in to admire the details. I like that the main characters are an integral part of the gameplay, and their unique driving abilities are a fun addition that will hopefully be expanded upon — I’d love to see their abilities carry over to the base building stages and have an effect on the revolution itself. 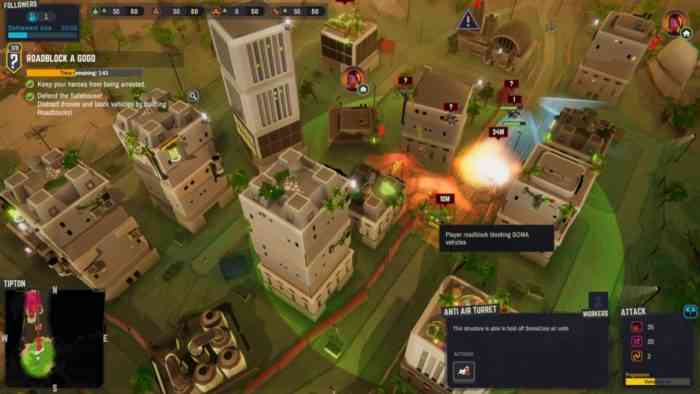 I haven’t given up on Blaze Revolutions, and there are a few improvements I hope to see by its full launch that would actually make it an exciting and addicting game. I hope to see far more base building and an additional Creative mode to bypass the overpowering driving stages. I also hope that players will receive more agency and actually need to use strategy in order to succeed. If Blaze Revolutions is going to market itself as a base builder and real-time strategy game, it needs to up the ante and truly deliver these elements.