This past week COG was lucky enough to be invited to the Canadian launch event for Watch Dogs, Ubisoft’s long awaited game.  The event, held in Toronto, was open to both Media and the general public, the latter being allowed in later in the eventing.  Of course Ubisoft knows that Watch Dogs is a great IP to a lot of people already, and they had a retail store selling Watch Dog branded hoodies, shirts and other items.  People seemed generally interested in these things, but come on, we were all there to be some of the first to play the actual game itself, and play it I did….well, I played the demo that was on hand at the event more then a few times. 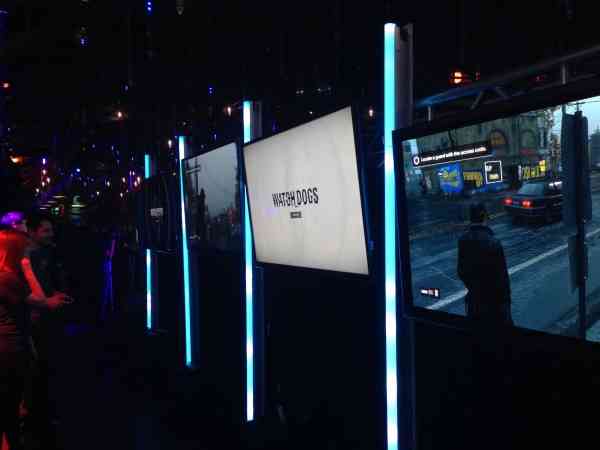 For posterity sake, I am not going to set up what the demo/level that I played exactly was as I don’t want to ruin any of the game itself. Watch Dogs has a lot happening in the environments and you’ll get to know the pace of the game quite quickly. You’ll also discover that running around and gunning people down, crashing cars, blowing up transformers, and whatnot will create unwanted attention. This fact, even in the brief demo at the event, forces one to think out many scenarios to complete objectives.  In this huge playground there are so many different ways to accomplish objectives that it creates limitless gameplay options.

As I previously mentioned I did meet my virtual maker quite a few times, but those deaths were a learning experience that helped me formulate a couple strategies to get into an area that is being heavily protected by guards, electronic gates, cameras and barbed wire. Not to mention that with one wrong move the guards can call for backup for better-equipped guards to handle the situation.  First and foremost going in guns blazing is not going to work the majority of the time unless you’re really good at controlling the situation. The guards will coordinate and mow you down before you even have a chance to get control of the area.

After experimenting with my approach to this demo level I found three different methods that allowed me to get through it, all with different tricks and tactics. The first approach took the most thinking and planning, let alone execution of said plan. From hacking into multiple electronic devices to utilizing my skills as a pickpocket, it took a lot but the end feeling was great. The second approach I tried had me still hacking into a few devices of some sort, but there was some weapons play as well. This was pretty satisfying as being able to pick off enemies with a silenced pistol felt good.  The third and final approach I was successful at had me only hack something once, but I got to use quite a bit more brute force and it as close to a full frontal assault I could muster, but there was still a bit of prep work to set up that scenario. There are a variety of ways to approach the game and the demo we played only scratched the surface.  What I definitely learned though was that you could work out different methods for your obtaining your objectives, and if the whole game is like this, which it is expected to be, then “wow”. 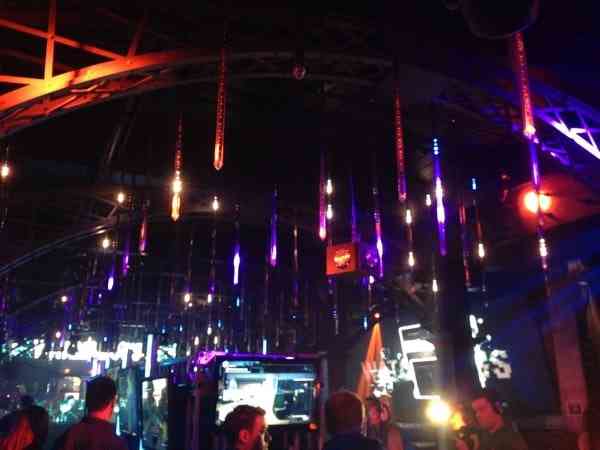 The atmosphere of the event was rich with excitement and anticipation for the launch of this game on May 27th.  Overall, Watch Dogs seemed to be generating mostly positive buzz throughout the crowd.    However, as with most things, not all were swayed by the shiny new title in front of them especially one gamer who made a point of saying that the style and layout of the game was not one that he would enjoy, but the game did a good job in showcasing the power and the direction that new games are taking with the tools available to them on the new generation of consoles. Many comparisons were made to Ubi’s current software lineup taking bits and pieces from titles like Assassin’s Creed, Splinter Cell and to some degree Ghost Recon. Don’t get this wrong the game stands out on its own but you can see influences from the core Ubisoft franchises.

Plenty of gamers were impressed enough that they were grabbing some of the Watch Dogs merchandise and I tell you I was quite tempted to make the splurge whenever I saw someone toting an Ubiworkshop shopping bag. Being quite the fan of their work I highly recommend checking out their wares if you’re looking for some gaming related materials to add to your collection.

After my time with the game at the event I am convinced I will enjoy Watch Dogs and look forward to playing through the story and discovering all the cool things in this world. I’ve made the comparison in the past that Watch Dogs is just a modern day Assassin’s Creed, but I am confident in saying I was completely off base and Watch Dogs is a title that will stand out on its own.  You can catch keep an eye out on COG’s main page for our review when it’s done too.