Imagine a completely immersive way to feel like you’re flying a plane without even having to leave the comfort of your house. Okay, well maybe this has existed for a while but Turtle Beach has just thrown their name in the ring with their new VelocityOne Flight Universal Control System. And it’s really great they did.

Turtle Beach has thoughtfully designed a comprehensive control system that is equipped with everything you need to soar through the air all around the world. It’s complex, colorful, absolutely badass and game-changing. If you’re an Xbox or PC player who takes flight simulation seriously the VelocityOne Flight Universal Control System is definitely the accessory for you. Hell, if you’re someone who’s interested in flight simulation, the VelocityOne is more than worth your time.

When you open the box, prepare to find a large control system that’s in 2 separate and sturdy plastic parts. The main piece, with the yoke steering controls, clamps onto your desk (or can be secured with adhesive suction) and the other smaller piece, with the throttle, easily clicks into the first piece. You’ll get a few pieces of paper to help with the easy setup, two color coded cords, different interchangeable throttle pieces and a couple face plates for the flight indicators.

From the get-go you can tell the VelocityOne Flight Universal Control System is high-quality. It’s made with a thick, durable plastic. Not a single piece of the entire control system looks or feels cheap. The top, customizable throttle pieces are very snugly in place and won’t easily pop off. It’s definitely not a concern during play. Even the face plates don’t move much unless you pull on them. This is just another way Turtle Beach showcases how well designed the VelocityOne is.

Setup is very simple – use an allen key from the top compartment to tighten and clamp the VelocityOne Flight Universal Control System in place, plug in the color coded cords to the appropriate spot and the Xbox/PC and open Flight Simulator. It’s that easy. Well, mostly. I ran into an issue where I couldn’t download Flight Simulator at first. Just ensure that your PC has the latest updates and you can skip this frustration. 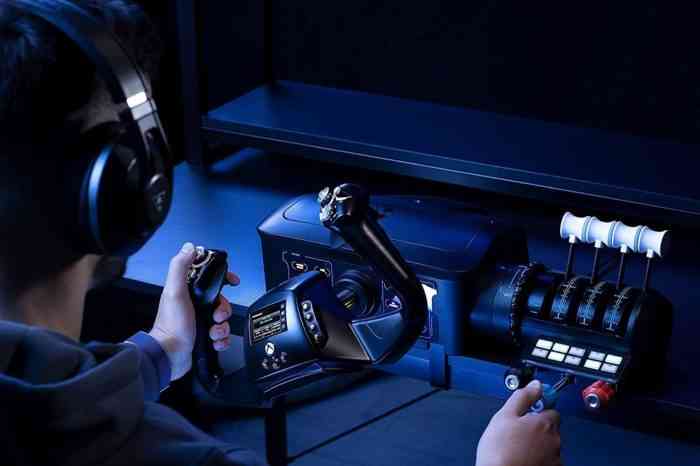 Turtle Beach stated that they’ve collaborated with world-class aeronautical engineers and pilots and it shows. The level of detail they’ve brought when it comes to the design of the VelocityOne Flight Universal Control System is unlike anything I’ve ever seen. The full suite comes complete with a dedicated trim wheel, a 180 degree yoke with integrated rudder controls, and a modular throttle quadrant. Overall it comes with a whopping 40 different buttons! And out of the 40 there are 10 completely programmable buttons so you can customize your entire experience. There’s ambient lighting that can be updated in your main settings screen on the VelocityOne. On top of that there are 12 in-flight indicators that will light up while you’re in the air including fuel low, auto pilot, landing gear etc.

You can also change your view from external to cockpit, each with their own benefits. External is the better option when you’re trying to learn the angle, pitch and speed of the plane. You’ll be able to see every aspect of the plane’s movement from the outside. Cockpit, on other hand, is what’s going to give you the best immersive experience. This is what’s going to feel like you’re the one flying the plane. Or crashing it, if you’re anything like me. You might not want to do a bunch of barrel rolls all the time. They’re fun, but dangerous here.

Prepare to Crash More Than a Few Times

What makes this experience even more captivating is the sound system. There’s an option to plug in a headset to the side of the VelocityOne and I would definitely recommend doing just that. I tried a few different headsets and if you have a Turtle Beach headset that comes with 3D immersive audio or the superhuman hearing setting, use it here. Out of all of the headsets I own I found the best was the Syn Pro Air because of its 3D and superhuman hearing sound options. There’s nothing more frightening than having the plane start yelling stall, stall, stall, the sound completely surrounding you, right before you crash.

Are you starting to see a pattern yet? One thing is for certain, if you’re a newbie to the flight simulation world, you will crash…a lot. Even if you go through the practice offered by Microsoft Flight Simulator. Or maybe I’m just not that great. Either way, unless you’re a pro, trying to master the VelocityOne is really damn hard. Which, if we’re being totally honest it’s to be expected since we’re not just using a mouse and keyboard or a controller anymore. 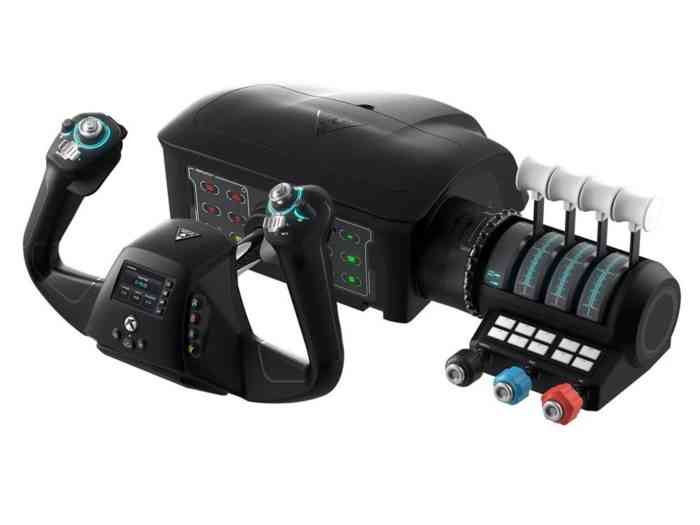 Now, despite the difficulty and even if you crash a lot, it’s not going to be overly frustrating. I didn’t find it to be anyway. You’re still getting to enjoy the amazing views from all over the world, and you’ll just have to restart and try again. Just be extra cautious when you’re about the land if you’ve made it all the way to that point. Because it’s annoying to see a perfect flight up to that point end up in smoke.

Now that’s not to say that the VelocityOne isn’t smooth as hell because it is. The yoke allows for full and precise movement, though not entirely 1 to 1. There is a slight noticeable delay between movement made with the VelocityOne overall (not just the yoke) and how it translates on screen. This is an easy adjustment to make and nothing that’ll break your immersion. The trim wheel offers the perfect amount of tension but the throttle controls are a tad too smooth. I would’ve liked to see a bit more tension with the throttle since these will end up getting looser over time. It’s a small thing, but worth noting.

If you’re looking for downsides to the VelocityOne you might be shocked to learn there aren’t many at all. Just two. And the first one is minor. I wish that the wires would’ve been less visible overall, even a wireless Bluetooth option would’ve been cool. The second is that the VelocityOne is $379.95 USD so it’s quite the pricey accessory for anyone who doesn’t have a huge interest in flight simulation or for the casual gamers.

That said, the VelocityOne is crazy fun and really takes advantage of its realism and immersion all around. It genuinely makes me want to play Microsoft Flight Simulator on the regular and I didn’t know that would ever be possible. It’s not my usual choice of game. I don’t have VR but the VelocityOne definitely delivers an experience that’s close to that. It really helps imagine what being a pilot might be like in the safest environment possible. If you’re playing Microsoft Flight Simulator (or other flying sims) regularly the price tag of the VelocityOne won’t bother you too much. Just save up for a bit, it’s more than worth the price of admission. In fact, it’s a complete game changer.

Gran Turismo 7 Is Back Online
Next The Game Awards 2021: The Best and Worst Moments
Previous 6 Things I Love About the MSI GE76 Raider Gaming Laptop