Tell ‘Em How You Really Feel

A good microphone should help you express yourself. Be it through song, spoken word, sweet voiceover, podcast, or streaming. But what if the microphone did more than capture and project your voice? What if it could capture those elusive feelings, as well? The Razer Seiren Emote mic will do exactly that, assuming your feelings can be compressed into an 8-bit assemblage of brightly-glowing pixel art. Also, it sounds great! 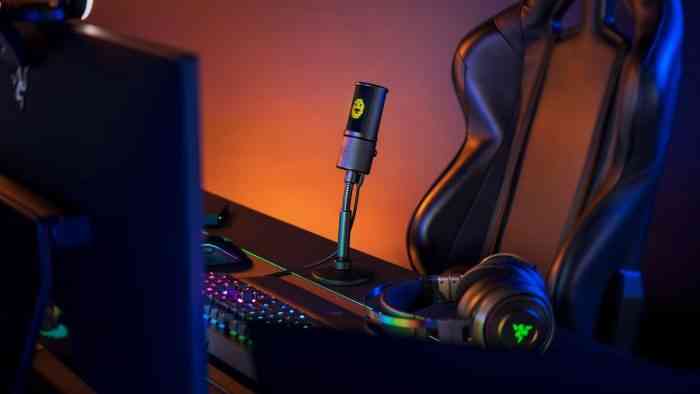 I must disclaim here, for the sake of integrity: I am not a Twitch streamer. I am only somewhat certain I could even strike out as one, given my current hardware and bandwidth setup. However, I will concede that the Razer Emote would be a fabulous start to any newly blossoming streamer career. While the mic has excellent pickup, it doesn’t soak up much in the way of ambient noise. Whereas I usually need some sort of sound buffer for any recording work, this thing can just bask in the open air. I’ve even kept it constantly set up, both for its convenience and the equalizer visuals.

Yes, even if you don’t do any Twitch streaming, the Razer Emote will happily pump out a steady stream of glowing pixels. Be it YouTube, Spotify, or anything else, this mic is ready to be your ambiance/inanimate hype man. This feature is more or less automatic, so long as you’re signed in to Razer’s software suite. Said program package is fairly robust, albeit a little dense. As it’s geared towards any and all Razer products with the required inner light, there’s a lot to sift through. If you’re already a Razer devotee, this will be old news. On the other hand, if this is your first cool glowy tech from the company, expect a short educational phase spent learning what everything does.

The Future is Glowing

There’s a whole arm of this mic’s higher functions that I never even touched. As a non-streamer, all that ’emotes keyed to audience/streamer activity’ stuff was way outside my strike zone. Rest assured however, that you can absolutely program the Razer Emote to react in dozens of different ways to anything on the stream you can think of. Common catchphrases, subscriber notifications, raids, wins, and losses are all ready to be marked by whatever bright and gaudy pixel portrait you can assemble. Of course, none if this matters if the mic doesn’t sound great. And I assure you it does!

While most people won’t be running their video, audio, and capture through different programs, the mic shines with a dedicated audio setup. Even using something lower end like OBS, you still sound clear and consistent. I can’t get it to professional levels, but that’s more on my setup than the Razer Emote. Whatever venture you’re starting out on, this mic would be a fine launchpad.

Although if you’re just starting out, the price might give you pause. Consider this, however: if you’re looking to kickstart a streaming career, those vibrant, reactive emotes could be an excellent hook. Even without public broadcasting in mind, the quality is damn high. The input is set to work from a greater distance than other studio mics, while the background noise is kept to a minimum. I wasn’t expecting to, but I’m probably going to be using the Razer Seiren Emote for a lot of my recording going forward. If you don’t balk at the slightly higher price, this mic is an easy recommendation.