Marvel’s Avengers: Black Widow #1 Comic Is the Best in the Series Yet

These “Marvel’s Avengers” video game tie-in comics have been mostly mediocre. The talent involved is too great for the books to be total disasters, but the story restrictions are too tight for anything to be all that interesting. This latest (and for now, final) issue focuses on Black Widow, who is not my favorite Avenger. My expectations were pretty low. So color me shocked when this was easily the best issue in the entire series. 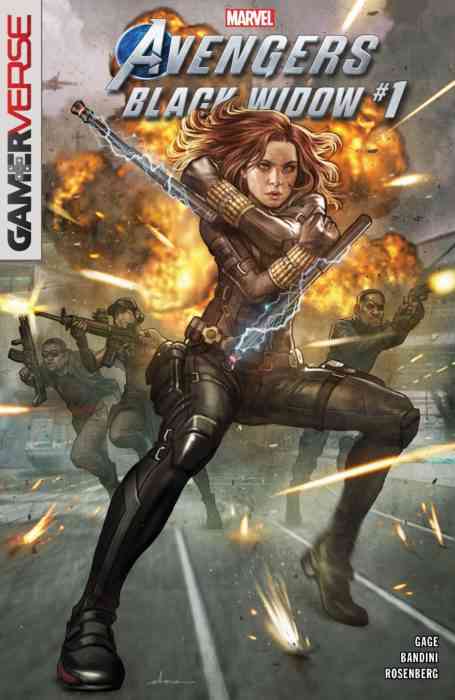 I shouldn’t have been totally shocked. This issue after all was written by Christos Gage, who is one of the best kept secret in comics. Gage has written a ton of excellent comics such as “The Authority,” “Thunderbolts,” “Superior Spider-Man,” and “Avengers Academy.” He did some of the best “Buffy” comics of all time. We was a writer on the Netflix show Daredevil, and video game fans may know him as one of the main writers on the amazing PS4 Spider-Man game from 2018. Gage is the guy you go to when you’ve got a spot to fill, and he always turns nothing assignments into excellent work.

He’s joined on this issue by Michele Bandini, whose painterly style seems like a weird fit for this series. Bandini does best with big flat planes where shading does a lot of the heavy art lifting, and not the linework. She’ll draw the vague outline of a face, but then fill in shadows to let you know the shape of it. I’ve talked a lot about how these issues are going for a highly militarized style, which includes a lot of tiny details. Bandini’s way of dealing with that is … well, ignoring it. This issue is all her own style, and veteran color artist Rachelle Rosenberg knows what to do. They’ve worked together before. Instead of trying to hard to conform to a style they’re unfamiliar with, they work hard to make a good looking comic, and they do exactly that.

OK, let’s talk about Black Widow. Now, I’m a lifelong comics reader, and I had always understood Black Widow to be one thing, and that’s treacherous. Before 2012, Black Widow stories were always about whether or not she was a double agent, if she could be trusted. Does that play into gendered stereotypes about deceitful women? Uh, yeah. Big time. It’s right there in her name. It’s kind of unavoidable. But after the first Avengers movie came out, Black Widow mainly became … nothing. A team player who was hyper-competent, badass, and not very compelling. It’s unfortunate that she’s often been put into the spot of the only woman on the team, because criticizing her feels like talking smack about women in a genre that is often not kind to them, but what I am calling for is for writers to do better.

Gage does exactly that by leaning into Black Widow’s duplicitous origins. This issue is an origin story of Natasha’s earliest days working under Nick Fury in SHIELD. It’s actually kind of weird that the movies just glossed over this time period because it naturally lends itself to conflict. The other agents don’t trust Widow at all. Natasha is used to doing things her way, and is struggling to adapt to the methods of the comparably gentle Americans. When she gets caught up in a whole double-agent scheme, you are genuinely unsure if she’s guilty or innocent (or as it turns out, sort of neither?). That’s sharp writing by Gage!

The other thing I’ve enjoyed in these issues are the deep cut characters. This issue introduces one of my favorites in a big way: Tony Masters, who eventually will be known as Taskmaster. ‘Ol Tasky is a great villain. He’s got the power to mimic any movement style he sees be it dance, combat, plumbing, or solving a Rubik’s Cube. The thing is, every time he acquires a new skill, it erases his memory. So he’s constantly hunting for clues about his mysterious past, Memento-style. A lot of the time, he’s the guy who trains the legions of faceless henchmen for the villains, and he’s sort of a beloved coach to all the various Hydra and AIM goons. Taskmaster is fabulous.

This issue also serves as an origin for him! The specifics are fun, but it only hints as his powers. For the most part he just seems to be a handsome, talented agent. He’s a match for Black Widow. Taskmaster is going to be the villain in the opening level of the game, and also in Black Widow’s upcoming MCU movie, and this issue made me more excited about seeing them face off than any other material Marvel has put out so far. Great job Christos! Great job Michele! Everyone on this creative team nailed it.

I’m glad to end coverage of these series on a high note. I was worried that the Black Widow story would just be a dry action set piece, maybe of Natasha flipping through a hallway and kicking some unimportant thugs. But this creative team reminds us of the single most important aspect of comic book storytelling: Imagination. Other media balances a lot of concerns, but comics have always been treated as lesser, as second rate. Comics are for kids, they’re just picture books for people too stupid to read books with lots of little words right? But this has led comic creators to embrace that silly side. That’s why comics are filled with talking gorillas, and soap opera twists, and transdimensional-god-bullets. Because the best comics celebrate unrestrained creativity. These “Avengers” comics have mostly been in service to selling a video game that hasn’t yet come out. This issue is in service to the possibilities of the comic book medium. How great is that!?