For months, I had been harboring a secret shame.  There was something about me that I didn’t share with any of my friends or family, out of fear and embarrassment. Yes, my name is Patrick Anderson, and I bought a PS TV.

Ok, are you finished chuckling?  Can I go on?  In my defense, I bought it because it supposedly offered Remote Play of my PS4 on any TV in my house – yeah, a big NOPE on that.  So, bottom line, let’s just say that the PS TV has been a cute little black metal box, sitting beside my TV for a few months now, its only purpose, apparently, to mock me and my stupidity.

But then, just a few weeks ago, I finally found a reason to stop hating the PS TV and its high-pitched evil laughter (for some reason mine actually laughs – that might be my own issue).  In fact, this thing I discovered has made me not only like the PS TV, I actually love it.   What is this thing, you ask?  I’ll give you 3 words:  Persona 4 Golden.  To put it briefly, Persona 4 Golden is the best RPG I have ever played, on any console; it may in fact be one of the greatest RPGs of all time (let the rage-mail begin..).  I am having so much fun playing it that, if the PS TV didn’t have any other games on it, it would still be worth buying, just for this one gaming experience. 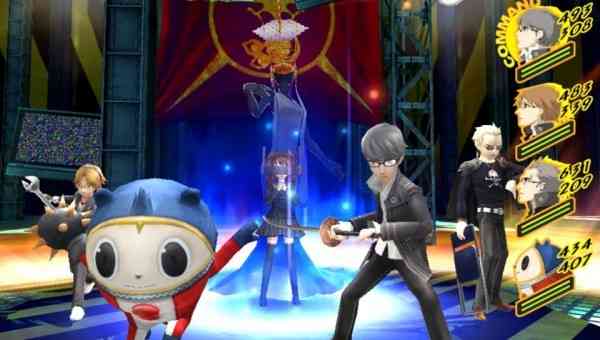 “Persona 4 Golden is the best RPG I have ever played, on any console; it may in fact be one of the greatest RPGs of all time (let the rage-mail begin…)”

The first thing that sets Persona 4 Golden apart is the contemporary setting.  It takes place not in a medieval kingdom, but in a modern high school.  Its characters are, on the surface, banal – they go to class, they have silly conversations about joining extracurricular clubs or where to hang after school.  It might sound boring, but it actually makes the game much more interesting when they find themselves in the middle of what becomes a huge murder-mystery.  The everyman setting and characters make you, as a player, feel more like this could actually happen, and makes the game much more immersive than typical JRPGs.  Face it:  in most games, you never feel like you connect with the protagonist – yea sure, he is humble, he’s the “little guy” who finds out he is destined for greatness, blah blah.  But sorry, he is not anything like you and me – are you an orphan with a mysterious wizard as your mentor?  Me neither.  Is your best friend a dragon?  Didn’t think so.  Persona 4 Golden drops all the clichés and just gives you typical people in an untypical situation, and it works really well.

And it’s also so refreshing to actually understand what is going on in an RPG!  Since I am confessing here, I will also admit that I often have no clue what the hell most RPGs are about.  Oh, I try to read it at first, and it starts off ok:  a boy wakes up after being found by the villagers – yes, I’m following – village is put under a curse by a witch  – sure, but why did she do that?  Oh yeah, she wants the sacred stones of Allamagor because, um – wait no – she HAS the sacred stones because the King won’t open the Gate of Enchantment to fulfill the Prophecy of the Purple something and …. Ok, skip, skip, SKIP, SKIP….

The story in Persona 4 Golden is easy to understand while still being interesting.  The situations are believable and real – the plot of the game could have been ripped out of a typical town’s local newspaper.  You are an unnamed big-city student (well, you get to name him – my dude’s name is “Aaabbb,” just like in every other RPG I play) who moves to a small town and gets involved in trying to solve a string of murders that have baffled local police.  Yes, there are supernatural elements – you use “Personas,” which are avatars that give you magical powers in battle – but they are skillfully woven into the real-life world of this game, in a way that always feels natural and logical.  I never stopped during this game and said “what is going on?”, and that is a first for me as a fairly experienced RPG gamer.  The story and dialogue are also mature, so you don’t get that creepy feeling that you are an adult playing a game intended for 8-year-olds. 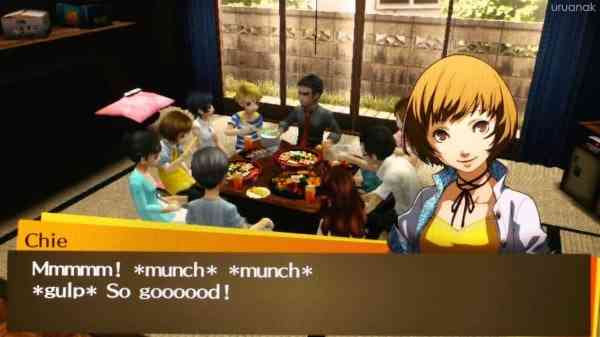 “The story and dialogue are mature, so you don’t get that creepy feeling that you are an adult playing a game intended for 8-year-olds.”

Persona 4 Golden also has so much to do.  It is a huge game for what is, let’s not forget, a PSP game – I am told this thing clocks in at over 60 hours from start to finish.  But you never feel like it is too big.  For example, there is one main quest in this game that you are always kept focused on.  While that may, in theory, feel constricting in today’s “open-world” videogame era, it really isn’t, because the game balances the main quest arc with time to do other things.  You have essentially “free time” after the high school classes are over to do what you want, but these choices (and the time you get to pursue them) are limited.  You can explore the town of Inaba, for example, but only a few selected areas.  Or, you can join a school club and hang with other students.  But, unlike a true open-world sandbox game, everything you do on your own still relates to the main quest in a clear way.  Clubs build up your social connections, and this helps in leveling-up your character.  Visiting shops in Inaba gives you items you will need when you go battling monsters again at night.  Even when teachers ask your character questions in school, your correct answers level-up your knowledge!  I am proud to say that, for the first time in my life, I am the smartest kid in class – take that, every classmate I had in high school.

What I love about the world of Persona 4 Golden is that I have choice, yes, but I never feel like I am wasting time.  Look, I love GTA as much as anyone, but how many times have you been playing it, and you’re sitting on your couch at your “crib” watching bad TV shows?  Seriously, there are lots of times I play GTA where I am thinking “what the hell am I doing with my life?!”  But you never feel like that in Persona 4 Golden.  Everything you do matters, and it is clear why it matters.  I’m telling you, I am around 22 hours in, and I haven’t been bored yet – that is a rarity in my experience. 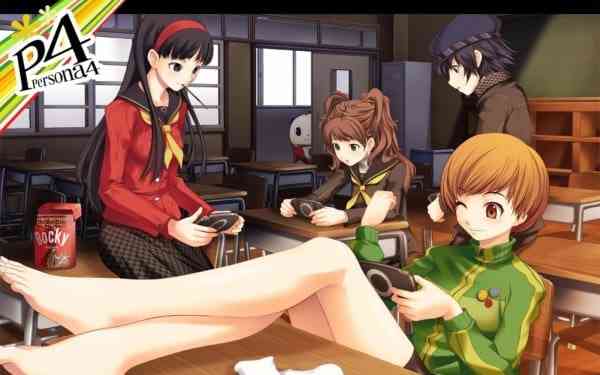 “I am proud to say that, for the first time in my life, I am the smartest kid in class – take that, every classmate I had in high school.”

If you get tired of all the things I have mentioned in the game so far, there is also Persona creation in the Velvet Room (a staple of the series), there is dungeon-crawling, loot-whoring, exploring … what I am saying is that I could never do justice to this massive experience in just one review.  This is one of those examples in gaming where you just marvel at how much value great titles such as this give us, for so little (I paid $29.99).  There was real love put into Persona 4 Golden, and frankly, I wouldn’t tell you everything in it even if I could – part of the fun is discovering it all for yourself.

I know what you are thinking – ok Patrick, Persona 4 Golden is great, I get it, but why the PS TV?  Since this is a PSP/PS Vita game, why not just play it on those, anywhere, on-the-go?  Well, because with the PS TV, you can play Persona 4 Golden on your TV, at home.  And let me say, leaving the house is way over-rated.  With government camera-spying, construction noise, and the horrible, death-bringing rays of our cruel sun, it is hardly worth the half-hour it takes to put on your tin-foil costume.  The PS TV frees you from the burden of societal interaction and also, allows you to play on your new kick-ass 60” smart TV.  And it looks great – the graphics are not latest-gen , for sure, but Persona 4 Golden is still really gorgeous.  I love the way they use the visuals in this game.  Cut-scenes are not inter-spliced clips of Anime like many JRPGs, they are the same game character models, who act out the cut-scene.  It feels really polished, especially in combination with the excellent voice acting and dialogue – I actually don’t want to jam a pencil into my ear-drum when the characters speak.  The production-values in this game are so good, that if I was told that this was a PS3 game, I would not question it.   No, this game is too beautiful for a portable platform – only with the PS TV does it really fulfill its big-screen destiny. 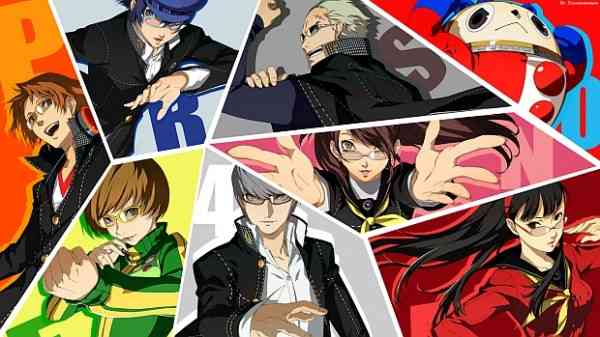 “It feels really polished, especially in combination with the excellent voice acting and dialogue – I actually don’t want to jam a pencil into my ear-drum when the characters speak.”

So, I hope all of this has convinced you to get off the fence and get a PS TV, if for nothing else, than to play Persona 4 Golden.  I think you would be really missing out on a great gaming experience if you didn’t – this is a classic RPG that is now optimized perfectly for the PS TV’s big screen presentation.    Plus, on a selfish note, the more of you who buy a PS TV, the less-stupid I look.  Please, help me stop the laughter.