By now, you’ve likely heard a lot about Ubisoft’s latest entry into the Assassin’s Creed series, Assassin’s Creed Odyssey. And you’ve probably also heard that it’s a lot like the last AC installment, Origins, which just came out in 2017. But if you’re on the fence about Odyssey because you worry that it’s just a repeat of the game you played a mere year ago, let me put your fears to rest right now: while Assassin’s Creed Odyssey might share some similarities with its recent predecessor, it is a much bigger and better game, and one that you definitely need to play. Need proof? Ok, let’s get started.

In Assassin’s Creed Odyssey, interaction with NPCs has been greatly enriched from Origins. You now have several choices of response during conversations instead of being a passive viewer during cutscenes. Now, I can hear you laughing cynically at this, assuming that the “choices” are merely superficial, just window-dressing disguised as real decisions – multiple paths to the same conclusion. But in Odyssey, I can tell you that that isn’t the case.

Choices you make will have a real impact on the way you experience the game. For example, after you defeat a foe you might be given the choice to show them mercy, or ruthlessly execute them. It’s not some kind of moral test that rewards you for being good; it is merely a choice you make that will send you on different paths later on. The foe you spared an hour ago might ambush you later with his friends – or he might appear at an opportune time to pay you back with help. There is also the possibility that romance can become an option of you choose the right dialogue responses. With Assassin’s Creed Odyssey, you’ll really feel that you are choosing how your own narrative journey unfolds – for better or worse.

One of the most obvious ways Odyssey differs from Origins is in the much bigger open world. And that’s saying something, because Origins was no slouch in the size department. Odyssey is just gigantic – weighing in at twice the size of Origins’ map – making it a dream come true if you’re the type of player who likes to explore and open up new areas of discovery. The thing is, though, Odyssey’s world is slowly unlocked to you as you play through the main quest – much like in The Witcher 3. You can’t just ride a horse all over the world and see everything right away; its secrets are slowly revealed to you. 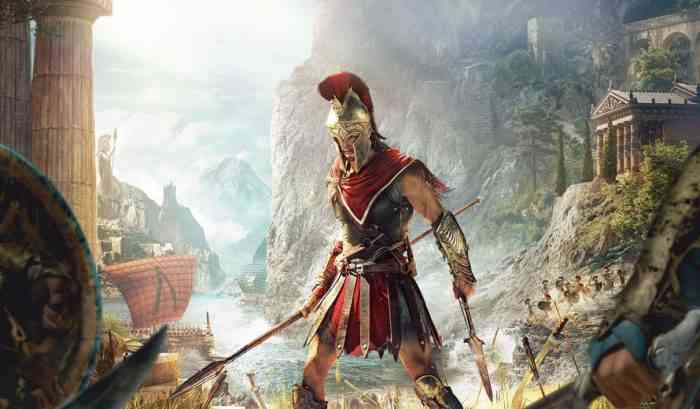 And trust me, that’s a good thing. Level requirements for each section of the map force you to slow down on your main quest and take time to see and do every side quest and activity offered before you move on. Ubisoft has taken great pains to fill every square mile of Ancient Greece with worthwhile content waiting for you to experience it. So, it means that not only is Odyssey’s map physically massive, but it’s also substantial. This is not just empty space wasting your time – you’ll find something rewarding around almost every corner.