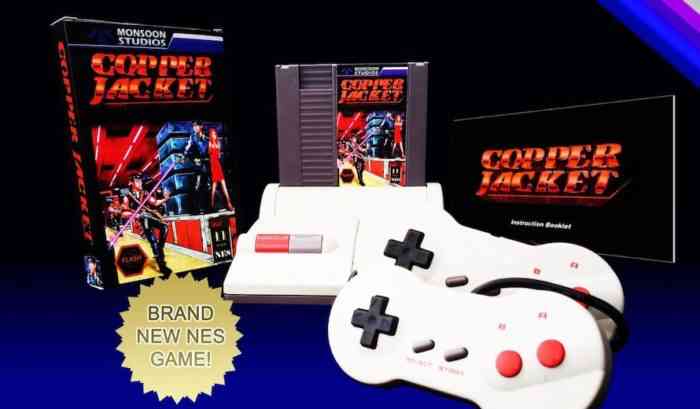 Players take on the role of a renegade combat expert whose fiancé has been kidnapped. The culprit is none other than your former boss Commander Zaslavsky, in an effort to control you. You and your best friend Anatoly must try to defeat the evil Commander, who has countless henchmen and war machines at his disposal.

Luckily in Copper Jacket, dying does not send you back to the beginning of the game. In two-player mode, the other player can continue. Otherwise, it will kick you back to the start of the level.

Armed with a military-grade rifle and heavy bombs, players have unlimited ammo. The game also allows players to upgrade their weapons. This includes a flamethrower, rapid-fire, shotgun and the bazooka.

Check out all of the classic retro goodness in the trailer below.

If you’re a fan of classic NES games but are looking for a bit of a modern spin, then Copper Jacket is for you. You can join their mailing list on the Monsoon Studios website.

Designed to be played on NTSC systems and will be available as a digital ROM. Copper Jacket promises to be a wild trip back to the first days of Nintendo gaming, with an expected shipping date of February 2023. What was your favourite NES game?