Cobra Kai is Coming to Fortnite

Sweep the Leg in Fortnite’s Next Update

Epic Games have revealed the next crossover coming to Fortnite. Coming right before the end of 2021 are costumes based on Cobra Kai, the hit TV show based on the Karate Kid.

From Star Wars and Naruto to the NFL and Marvel, Fortnite has featured countless crossover special events and skins. Now Epic Games has decided to integrate some new special skins and items based on the popular Karate Kid spin-off series, Cobra Kai. 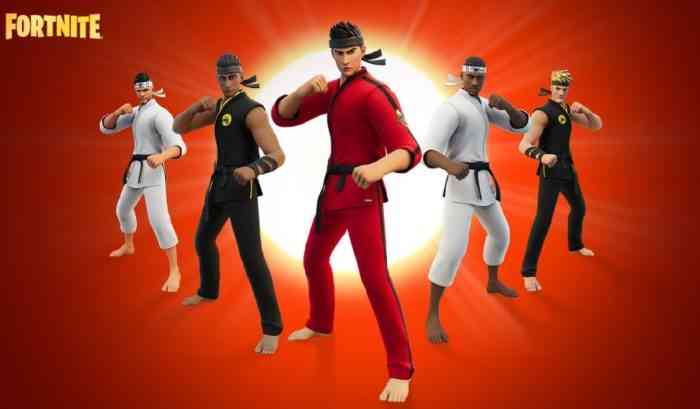 Netflix just released the series’ fourth season today. The series focuses on Johnny Lawrence, Daniel Laruso’s rival from the original movie, and his life after the film. The series has gained considerable popularity since its release, so a collaboration with Fortnite will be welcomed.

Epic Games announced the new Cobra Kai Set on the Fortnite twitter account last night. The set will feature several different skins from the series. There are ten skins in total available in the in-game shop right now, five female and five male.

These skins are based on either the Cobra Kai, Eagle Fang or Miyagi-Do dojos. There are even two other variations: the Karateka Jones outfit and the Heron Stance Hero skin. Each has their own significance for players to discover.

There will also be accessories based on the popular series. There are a couple of new Back Blings and Pickaxes available based on each dojo. In addition, there will be a Crane Kick emote available for players in this pack. Longtime fans of the franchise will recognize the move from the original movie.

Fortnite players can purchase these brand new items today in the store on PC, PlayStation, Switch and Xbox. They can be purchased individually for 800 V-Bucks each, or through the Karate KO and Dojo Showdown bundles, which are 2,000 V-Bucks each.

Which new item will you buy?

Fortnite Fundraiser for Ukraine Ends on High Note
Next
Former Call of Duty Dev Says, ‘It’s Time to Build From the Studs Up’
Previous
Genshin Impact Is Bringing Back Banners for Xiao and Ganyu