Back to the Spencer Mansion

For the 25th anniversary of the Resident Evil series, Capcom and Steamforged Games are going back. Way back. Not only are they going back to the first game, but they are also returning to the first physical medium of games with Resident Evil: The Board Game.

Steamforged Games has made over a dozen tabletop games based on video games, such as Horizon: Zero Dawn, Devil May Cry, Ni No Kuni 2, Dark Souls, Monster Hunter: World, and Sonic. They also made board games based on the Resident Evil 2 and 3 when the remakes came out and now their newest work is inspired by the first Resident Evil. 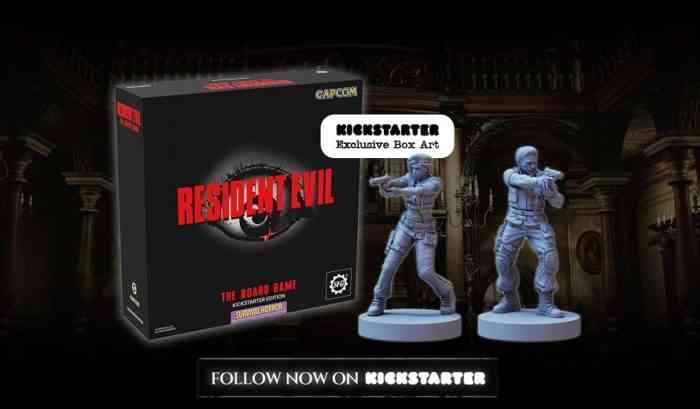 The Kickstarter for the game has not yet begun, so details are pretty scarce, but a teaser trailer was released. We can see that the players can choose between 4 characters (Jill Valentine, Chris Redfield, Rebecca Chambers, and Barry Burton) and navigate through different tiles make up the Spencer Mansion.

Like the Resident Evil 2 and 3 board games, players will encounter different enemies and scenarios, and how you handle them will affect the outcome of your survival.

Again, since the Kickstarter has not started, we don’t know any details of the campaign goal or any fun stretch goals. Stretch goals for previous Resident Evil board games included additional character pieces and game cards, so similar goals may be in store. They are also trying something called an “Open World Kickstarter”, where backs can unlock more stretch goals by exploring the mansion. Over the course of the campaign, backers can vote on which part of the mansion to explore and that will unlock a new stretch goal.

Resident Evil: The Board Game is expected to come to Kickstarter on October 26th.

Have you tried any board games from Steamforged Games? Let us know in the comments below.