There’s always been a spot for magic in the world of Dungeons & Dragons, but that’s nothing compared to what exists in the Feywild. The locale has been a popular world in the D&D canon for a while – it’s an Alice in Wonderland style of magical otherworld, populated by fantastical creatures, with natural beauty at every turn. But now, Wizards of the Coast is allowing players an even deeper look into these wonderous wilds, thanks to a freshly-released expansion book.

“The Wild Beyond the Witchlight” is a Feywild-themed expansion to the base Dungeons and Dragons experience. The contents are pretty extensive, coming with a pre-made adventure designed for low-level characters, new character backgrounds, and a few familiar faces from D&D expansions of the ’80s: Warduke, Strongheart, and Kelek. But the highlight for most players will likely be the new racial options for your next D&D character: you can now pick between a Harengon (an anthropomorphic rabbit-like race) and a Fairy (you know what a fairy is). 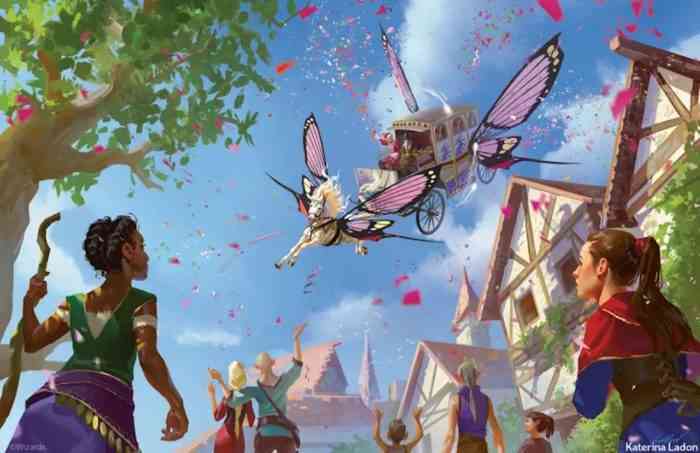 Like with all the other D&D races, these options grant players unique powers to add to their arsenal. The Harengon boasts some serious mobility with its ability to hop long distances, boosted initiative rolls, and more. Those who prefer Fairies can shrink and grow themselves, on top of having the ability to fly (so long as your armor isn’t too heavy, of course).

But the pre-made adventure is also worth keeping in mind – it’s themed around an inter-dimensional carnival that lets players seamlessly integrate the book’s world with any setting they’ve already made. It’s also designed with non-combat options in mind, offering players an omnipresent peaceful option if they’re crafty enough to figure them out.

The book is priced at around 50 USD, with a fancy alternate-art cover available exclusively at local games stores.