The Lord of The Rings: Rise To War Is Set To Launch Soon And Has Unveiled Its Cinematic Gameplay Trailer

The Lord of the Rings movie franchise is one of the biggest and most popular in history. It is no surprise that the Lord of the Rings has been brought to the video game world on numerous occasions, and quite successfully as well. From the Middle Earth series to the Lego Lord of the Rings titles, the games have become cult classics and are generally considered to be fun. NetEase Games and Warner Bros. Entertainment have announced that a mobile game, Lord of the Rings: Rise to War is coming to iOS and Android! 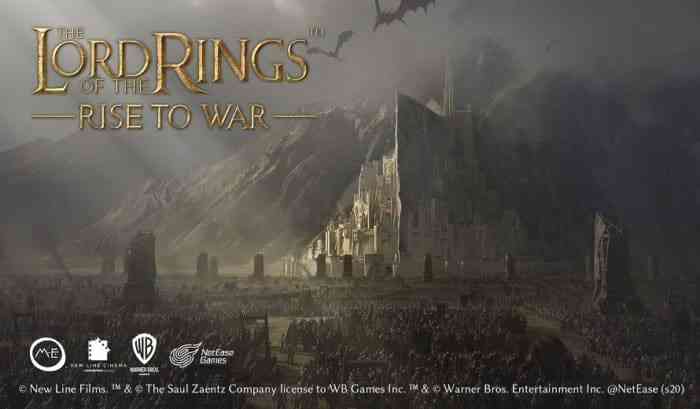 The company has confirmed that on September 23rd, Lord of the Rings: Rise to War will be available on mobile platforms. As the launch approaches, NetEase Games are excited to give fans a behind-the-scenes look at the making of the game in the second episode of Devs in The Tavern. In this episode, Nicolas, a developer, answers some questions and talks about the game.

Besides the latest episode, the company also released a brand new cinematic trailer. The minute long trailer begins by showcasing some elements of the world and of course, the golden ring! It then takes us to the iconic Eye of Sauron before highlighting the battles between soldiers and more.

In the game, players can build their armies, explore middle-earth’s wonders, forge alliances and build settlements to fend off the enemies. In Season 1, the fate of Middle-Earth is at stake. Players must choose a faction as a new war quickly approaches. In the end, only one factor that occupies Dol Guldur will find glory. Are you ready to fight for middle-earth?

Fans can check out the game here.

What are your thoughts on mobile gaming? Are you interested in Lord of the Rings: Rise to War? Let us know in the comments below or on Twitter and Facebook.


Robocop Is Coming to Fortnite

Hearthstone Battlegrounds Is Getting an All-New Minion Type on May 10th
Next
Lince Works Officially Releases Stealth Adventure Aragami 2
Previous
Lemnis Gate Has a Confusing, but Wild Time Loop Concept