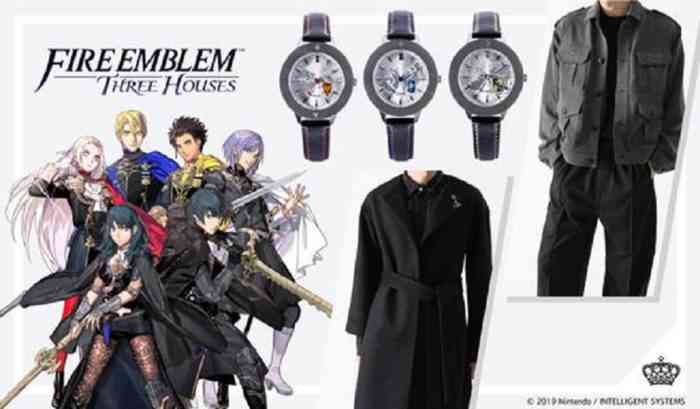 The coat, inspired by Byleth, has a familiar embroidery on its back inspired by the design of Byleth’s cloak. The coats are available in black and grey to reflect the color changes between male and female characters. The coat also comes with a brooch pin based on Byleth’s ring.

The Blue Lions Jacket features breast pockets embroidered with the faction’s in-game design as well as buttons engraved with the Blue Lions flag banner. The jacket will include different accents of blue.

The Black Eagles Model Watch comes with multiple bezels and straps based on each character and various in-game design choices. The silver bezel, with Edelgard’s crest, is paired with a black and red strap based on the House Leader, Edelgard. The map of Foldan is engraved into the dial while the Black House Eagle flag is found on the back of the case.

What are your thoughts on Fire Emblem? Did you enjoy the latest game? Are you interested in video game inspired items? Let us know in the comments below or on Twitter and Facebook.