Get to the Choppa!

Asobo Studio is constantly working on new features, improvements, and ideas for Microsoft Flight Simulator. They have a ton of different aircrafts, airports, landmarks, and locations, but there will always be a desire for more. Until there is a complete world within Flight Simulator like The Matrix, there will not be enough.

Right now, players can fly through the air in almost any airplane they desire, but there is more to flight than planes. Thankfully, Asobo Studio is expanding their methods of air travel with helicopters, but it is a ways away. 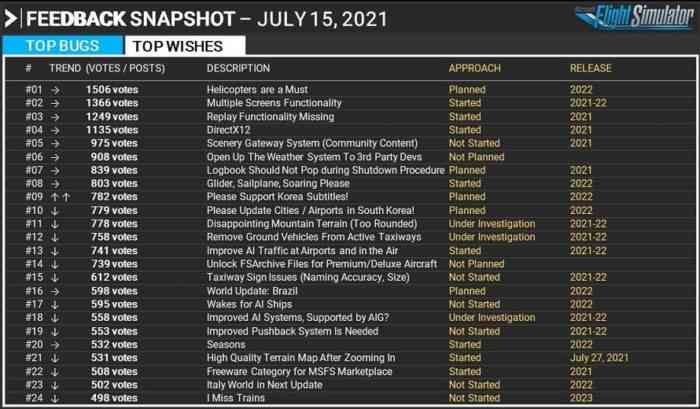 Recently, the Flight Simulator development team put together an updated roadmap of upcoming content and a list of the most requested features, bug fixes, and quality of life improvements by fans. The addition of helicopters was the number one more requested feature and the team is planning to add them in 2022.

Another feature that fans have been requesting is the use of gliders, sailplanes, and other means of flying without an actual aircraft. I doubt it would make an accurate simulator to have a glider at cruising altitude, but it is an interesting idea.

There are also a ton of requests and features specifically from the VR users, but many of them are not yet being worked on. Hopefully, Asobo Studio will be able to focus on VR once the Xbox Series X|S version gets released later this month.

Microsoft Flight Simulator is out now for PC and will be coming to Xbox Series X|S on July 27th.

What features do you most want on Microsoft Flight Simulator? Let us know in the comments below.

A Plague Tale: Requiem Trailer Revealed at E3
Next
Lost At Sea Finds a Home on PC, Xbox, and PlayStation
Previous
ICYMI: Chill/Challenging Puzzler Triversal Out Now On Steam