Wingspan Flies Onto Xbox One This Month

Bird is the Word This June

Wingspan, the chill digital board game about building your own bird sanctuary, is coming to Xbox One later this month. This soothing strategy card game gives you the chance to lure 170 unique birds to a network of wildlife preserves, all set to tranquil music and featuring beautiful art. There are three different habitats available for birds that prefer forests, wetlands, and grasslands. As you gather more birds, you’ll also unlock a lot of interesting facts about wildlife. If you already own the game on PC or Nintendo Switch, there’s a special surprise coming your way as well–a free “Swift Start” update will arrive at the same time the Xbox One version launches, adding ten new birds to the game.

Players take on the role of a keeper of a wildlife reserve, helping to lure new avian friends into their sanctuary. Each bird you can play will help to build a chain of powerful combinations in one of your three habitats, and each habitat plays a key role in building up resources to bring in more birds. It’s a very relaxing game perfect for anyone who’s feeling a little overwhelmed by 2021. 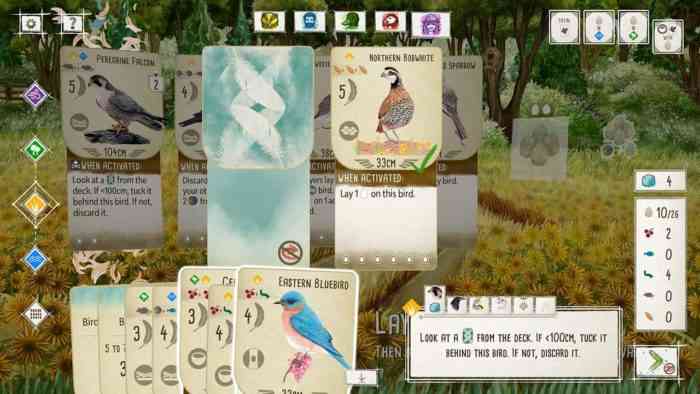 Wingspan is currently available on PC and Nintendo Switch at $22.67 CDN. It will be available on Xbox One on June 18th and iOS on July 20th this year.

What’s your favorite bird? Let us know down in the comments, or hit us up on Twitter or Facebook.

Call of Duty: Modern Warfare 2 Has Made It Easier to Spot Targets
Next
Scarlet Nexus Explanation Trailer Brings the Brain Punk Future to Life
Previous
No More Heroes 1 and 2 Will Be Coming to Steam Next Week