Choose Your Own Gl̴̗͐í̷̧ẗ̴̟c̵̎͜ḫ̶́ Adventure!

What’s more fun than a meta game? A meta game that pits the player up against the game’s developer, of course. tERRORbane is a tongue-in-cheek indie RPG modeled after classic JRPGs with a twist–namely, the developer is kind of a mess, and now so is the game. Players will take on the role of Terrorbane, a hero caught up in the developer’s muddled attempt to create the perfect video game. You can either help the developer overcome his shortcomings and help him fix his own game or challenge him. Either way, you will become the bane of all errors over the course of multiple playthroughs, uncovering secrets and having a good laugh in the process. This announcement trailer gives an excellent look at the kind of tone you can expect. Three words: too much sword.

tERRORbane offers the chance to explore a variety of interesting settings, each filled with callbacks to great moments in gaming history or neat twists on classic mechanics. There are bugs to fight absolutely everywhere, from Terrorbane’s body inexplicably disappearing to NPCs obliviously walking across rivers to the turn-based combat screen completely breaking down. If the trailer is to be believed, you can even escape death by keeping the game over screen from appearing fully. Now that’s what we call meta! 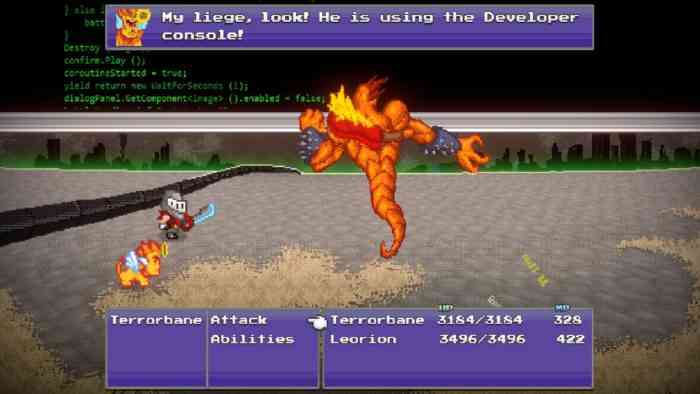 tERRORbane will be available on PC and Nintendo Switch soon.

What’s the funniest bug you’ve ever encountered in a video game? Let us know down in the comments, or hit us up on Twitter or Facebook.