Fight Across The Platforms

The Warhammer universe has long been a staple in the world of gaming and has become a pillar in the industry through various genres and with a multitude of series such as Warhammer 40,000, Total War: Warhammer, Warhammer Vermintide, Warhammer Online and even Warhammer Blood Bowl. Suffice to say, the Warhammer universe has limitless potential when it comes to creating compelling storylines and engaging gameplay for gamers and fans of the franchise alike. The Warhammer universe is set to expand on 27th May 2021 with the release of Warhammer Age of Sigmar: Storm Ground which is set to release on PlayStation 4, Xbox One, Nintendo Switch and Windows PC via Steam. Furthermore, the developers have revealed that the game will support crossplay across all platforms! 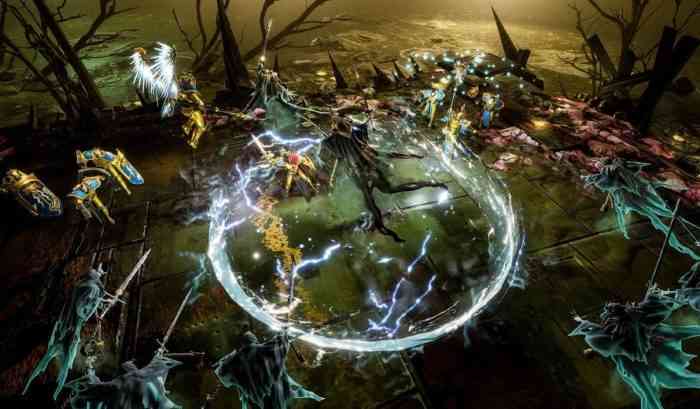 Warhammer Age of Sigmar is a turn-based combat game developed by Gasket Games and published by Focus Home Interactive. Each map is procedurally generated and offers a new experience to players every time. With the opportunity for crossplay action, players will compete against each other in PVP multiplayer modes via the common matchmaking pool or by using a code-based invitation across the platforms. Besides the competitive PVP mode, players will venture through the campaign mode building their army, collecting heroes, units, garnering skills, upgrading equipment and more in an effort to conquer all enemies and determine their best tactics and playstyle. Warhammer Age of Sigmar offers three highly customizable and unique factions to choose from, namely the Stormcast Eternals, the Ghoulish Nighthaunt and the Maggotkin.

The pre-order bonus for Warhammer Age of Sigmar: Storm Ground includes  a 15% discount which lowers the price to USD$33.99. Pre-ordering the game also rewards players with three exclusive weapons, one for each race. The retail price is USD$39.99.

Are you excited to hop into the Warhammer universe again in this turn-based action combat game? Let us know in the comments below or on Twitter and Facebook.