Biomutant Explained: Martial Arts at the End of the World

In the runup to its May 25th release date, Experiment 101 and THQ Nordic have released a trailer detailing the world and gameplay of their upcoming title Biomutant. Described as an “open-world, post-apocalyptic Kung-Fu fable”, Biomutant certainly promises a unique, action-packed gaming experience. 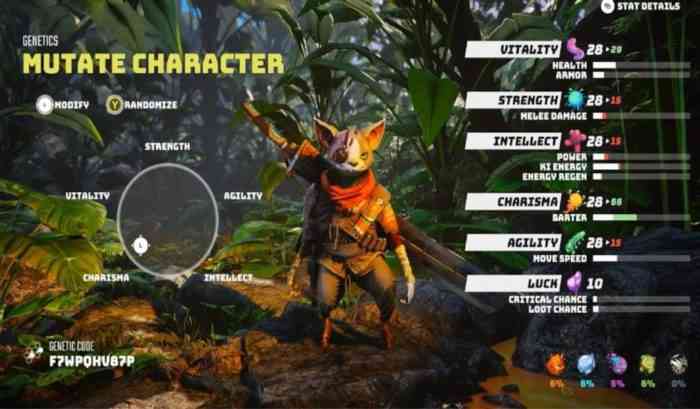 Featured heavily in the trailer is an in-depth character customization system, letting you build your own furry little warrior to take on the world. Check out the adorable plushie they’ve made of the little guy! An outfit crafting system will allow you to graft accessories and trinkets onto your outfits, bringing this customization a step further. The Legend of Zelda: Breath of the Wild is cited as an influence, and it’s easy to see why – the vibrant colours of the open world and the broad expanses of the wilderness are very reminiscent of the modern Switch classic. However, one aspect that’s been inspired by (and probably improved from) Breath of the Wild is the weapon condition system – your weapons will decrease in quality over time, but unlike Breath of the Wild’s often infuriating decision to have broken items become unusable, Biomutant will allow you to upgrade and continue using low-condition weapons.

There are many ways to progress your character in Biomutant – not only will you be able to rewrite your genetic code to change both your appearance and your attributes, but outside influences like exposure to bio-contamination can lead to the development of new mutations. And of course, no Kung-Fu story would be complete without learning new fighting styles and techniques along the way. There are six tribes of Wung-Fu warriors in Biomutant, each with their own distinct styles and designs. Early on you’ll be called to ally with one of them, but you’ll be free to change this allegiance at any time.

Plot-wise, the game will be centered around the Tree of Life, a mystical representation of the state of the natural world. A plague is spreading throughout the land, corrupting the Tree of Life and setting the six tribes in conflict – your goal will be to either unite the tribes and save the Tree, or to conquer them and destroy it, depending on your allied tribe.

Biomutant launches on PS4, Xbox One and PC on May 25th.

Learn About Danny Phantom In Latest Showcase For All Star Brawl
Next
Maneater Expands Its Hunting Grounds to Steam, Xbox Game Pass, and Switch
Previous
Hand-Drawn Metroidvania Aeterna Noctis Coming Out in December