Fishing might not be for everyone, but Pokémon is. The sport/hobby/sign-that-you-need-marriage-counseling has been a staple in Pokémon games right from the beginning. Getting the Old Rod, Good Rod, and Super Rod has always been required for completing the Pokédex. You may not be able to catch a Magikarp or Goldeen in real life, but the fishing accessory company Duo International has found a way to bring fishing and Pokémon together again in real life with some Pokémon fishing lures. Unfortunately, these are only coming out in Japan. Damn you, Duo International! 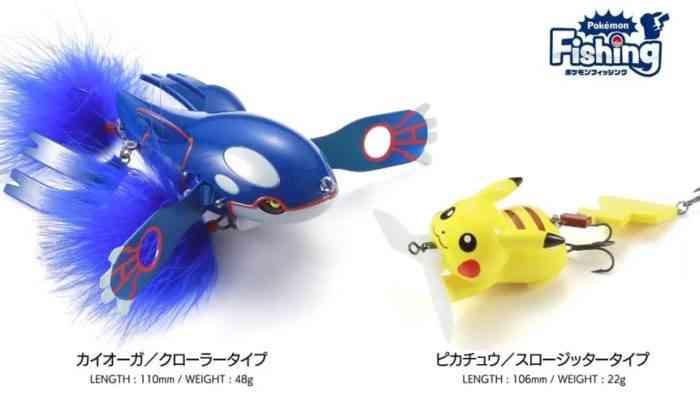 Two different lures are being released; a Pikachu lure and a Kyogre lure. They aren’t just plastic Pokémon you attach to your hook though. Well, they are, but they also move around in the water. The Pikachu lure has joints at the base and tip of its tail to attract dumb fish, as well as room for two hooks. It also has a rudder on it so that it moves around when you reel it in. The Kyogre lure has joints on its front and back fins, and drags blue fur behind it. The commercial shows them in action, moving around in the water.

People love fishing and people love Pokémon. Enthusiasts of the two would definitely want to get these. Too bad they are exclusive to Japan… for now. Other extremely popular Pokémon merchandise has led to more production by The Pokémon Company, so maybe these lures could make their way to Western waters.

Would you get these Pokémon lures if you had the chance? Let us know in the comments below.