The first major content update for Puyo Puyo Tetris 2 is releasing today, and along with it comes the blue blur himself, as Sonic the Hedgehog becomes a playable character! 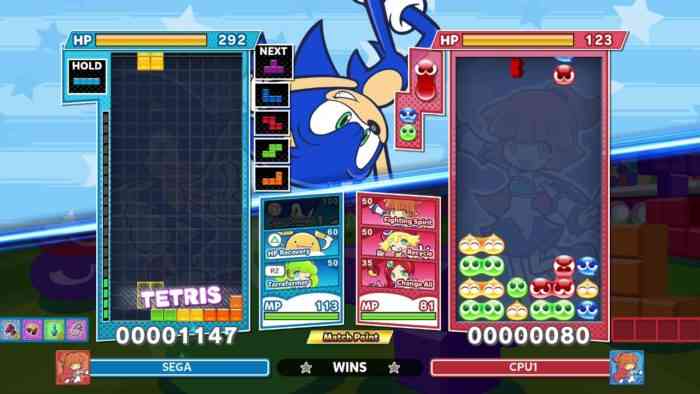 Sonic will be joined by three other new characters, Lidelle, Ms. Accord and The Ocean Prince. Here are the descriptions for each of the four new characters:

Sonic the Hedgehog: The speedy blue hedgehog lives life by his own rules. He hates dishonesty and injustice, and he’s not afraid to fight for what’s right.

Ms. Accord is a teacher of the Primp Magic School. Though gentle and kind, she’s known to prepare rather peculiar lesson plans. While she only played a minor role in the original Puyo Puyo Tetris, this update marks the first time Ms. Accord will appear as a playable character in a localized release since Puyo Pop Fever.

Next up is Lidelle, a student of Primp Magic School. Known to be mild-mannered and soft-spoken, she is also very shy and hides her horns by wrapping them with her hair. While sharing no blood relation, she considers Dark Prince and Draco her big brother and sister.

Finally, The Ocean Prince is, what else, the prince of the sea, a royal who can be pretty selfish without realizing it. He sometimes takes a human form when he uses a particular spell. Like Ms. Accord and Lidelle, this will mark his first playable appearance since Puyo Pop Fever after making a cameo in Puyo Puyo Tetris.

The new characters will all have their own set of skills to use in the game’s Skill Battle mode. Some of which can be seen in the new trailer found below:

Along with the addition of new characters, there will also be a brand new Boss Raid mode added to the game. This new skill-based co-op mode allows up to four players to team up to take on a common foe. The mode will support online multiplayer for all platforms, as well as a couch co-op mode exclusive to the Nintendo Switch version of the game.

The mode will follow the Skill Battle mode ruleset, tasking players to strategically craft a team from the expanded roster of characters in hopes of devising a winning strategy.

The Boss Raid mode will offer different difficulty options, adding additional bosses to face for every difficult you advance. It’s risk versus reward, as these bosses have their own skills to use against you, taking on more of them will be no easy task, but the rewards will be sweeter if you succeed.

Other additions to the game include four new background music tracks, including the Sonic theme, as well as 20 new Avatars featuring some of Puyo Puyo Tetris’s most popular characters.

The update is out for PlayStation 5, PlayStation 4, Xbox Series X|S, Xbox One, and Nintendo Switch, though there is still no confirmation as to when the game will be making its PC debut.