Rocket League Sets Up the Gridiron for Super Bowl LV

Get ready for a Super Bowl like no other. Last year around this time, the threat of the Coronavirus was becoming clearer, but it had not quite taken control of our lives as it has. This year’s Super Bowl will be a little different, like many things over the past year have, so why not go the extra mile and make Football in Rocket League? There are so many different game presets and ball types, but for Super Bowl LV, Rocket League is adding an official Gridiron mode. 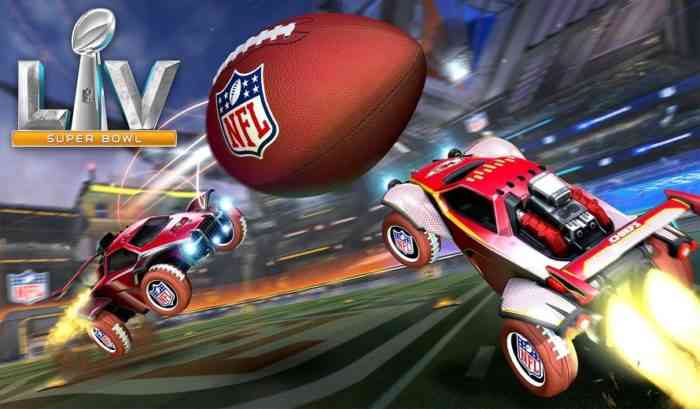 Rocket League is kind of wacky already. How exactly can you make football work in this game? I mean, have you ever tried to bounce a football accurately? Good luck with that. Psyonix has worked it out though. Certain mutators have been added to make this a pretty passable football mode. For one, the ball takes the form of an American football. It also sticks to the top of a player’s car when they run into it, kind of like in the Spike Rush mode, so there won’t be any awkward passes and teams can make “running” plays. The scoring system is also reworked. If a players runs the ball into the opposing team’s goal, that counts as 7 points, and if they pass it into the other team’s goal or the ball enters while loose, that counts as 3 points.

The @NFL Super Bowl LV Celebration is coming to Rocket League! Join us Feb 2-8 as we unveil our brand new game mode, Gridiron, Event Challenges, and the return of the NFL Fan Pack. #RLGridiron

There are a few other rules that Psyonix has laid out on their site, but those are the main ones. If you are interested in the Gridiron game mode, you can play it on an NFL/Rocket League field starting on February 2nd. The Gridiron event will run for a week before you miss your chance to play it. Rocket League is available on PC, PS4, Xbox One, and Nintendo Switch.

Will you try the Gridiron game type? Let us know in the comments below.