Swedish Chef Has Joined Overcooked! All You Can Eat

The Muppet is Available to Play as of Right Now

We have been non-stop covering the sheer quantity of announcements made at last night’s Game Awards and here is yet another one of those announcements, Swedish Chef has joined Overcooked! All You Can Eat. 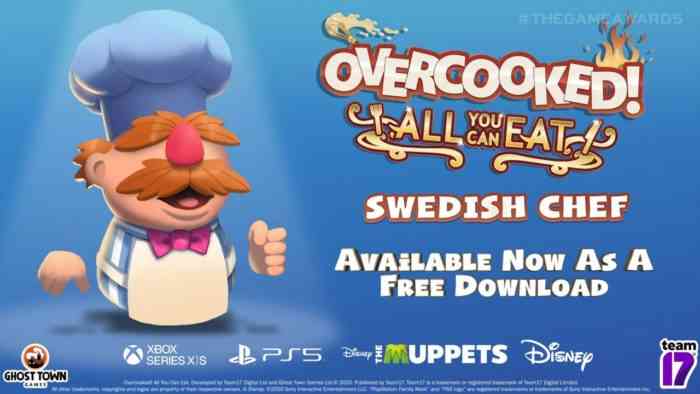 Swedish Chef was announced as a presenter for the Game Awards a couple of days before the show on the event’s twitter page.

Okie-dokie. Next up, we are honored to welcome Swedish Chef from @TheMuppets to video game’s biggest night live next Thursday! pic.twitter.com/pUS25qkbaj

While we were expecting the infamous chef known for his work with The Muppets to present on the show’s many awards, instead Swedish Chef was there to accept an award–or at least that’s what he thought. In a comedic video played during the Game Awards last night, Swedish Chef graciously accepted an award before being set straight by the show’s host, Geoff Keighley. The video then went on to reveal the real reason why the Muppet was there and that was the reveal of his addition to Overcooked! All You Can Eat.

Overcooked! is a chaotic couch co-op cooking game for one to four players. Working as a team, you and your fellow chefs must prepare, cook and serve up a variety of tasty orders before the baying customers storm out in a huff.


Overcooked! All You Can Eat Landing On New Platforms Next Month