For those of you still kicking around in Jump Force, good for you. Honest. Though the game did not exactly live up to the Avengers of anime that it set out to be, it is still a satisfying fighter for fans. Last month, certain players were accidentally treated to the next two Jump Force DLC characters through a technical glitch. These two characters were Yoruichi Shihion from Bleach and Giorno Giovanna from JoJo’s Bizarre Adventure. Well, Bandai Namco has officially revealed just one of the two characters we definitely all already know about. 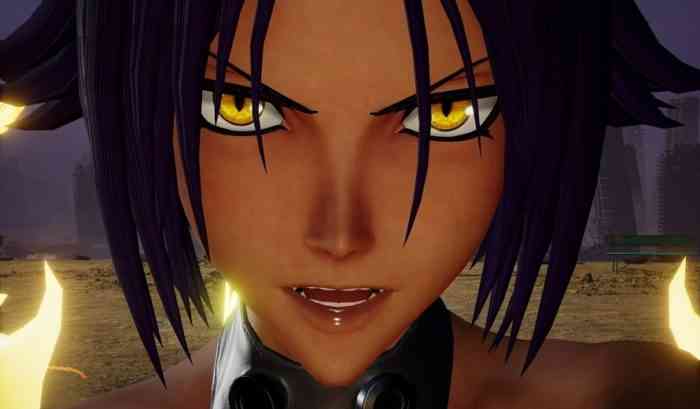 Last week, a short trailer was released for Yoruichi. She was also showcased at Jump Festa 2021, where an extended gameplay reveal was shown. The trailer shows her in her black, backless, sleeveless, generally revealing body suit for combat, which if I remember correctly, is necessary for her abilities. In the gameplay video, we see her, mostly take a beating from her student Ichigo, but somehow defeats him in the end. The second battle sees her face off against her former collogue Toshiro Hitsugaya.

During these battles, we see her signature abilities from the anime and manga, the Flash Step and the Flash God Black Cat Warrior Princess form, which covers her arms, legs, and torso in lightning, and she grows a tail. During this attack, she moves with blinding speed, unleashing a flurry of electrifying attacks. The short trailer reveals her as the next DLC character, but leaves the last slot in the season pass a mystery (as if we don’t know). Yoruichi will be available for download in 2021. Jump Force is available for PC, PS4, Xbox One, and Nintendo Switch.

Will you be playing as Yoruichi or Giorno? Let us know in the comments below.

Orcs Must Die! 3 Storming Xbox, PlayStation, and PC
Next
Geoff Keighley Addresses The Last of Us: Part 2 Controversy
Previous
Here’s the Pre-Order Bonuses for Back 4 Blood