Out of This World Content on its Way for Star Wars: Squadrons

At first, Motive Studios said that Star Wars: Squadrons would not be receiving any DLC. They lied. Thankfully, they lied. Yesterday, they announced that after such a warm reception of the game at launch, they were so thankful to fans that they began working on additional content. There will be two free content updates; one next week, and another next month. The new content includes new areas, new ship components, and entire new starships. It’s an exciting time to be a starship pilot. 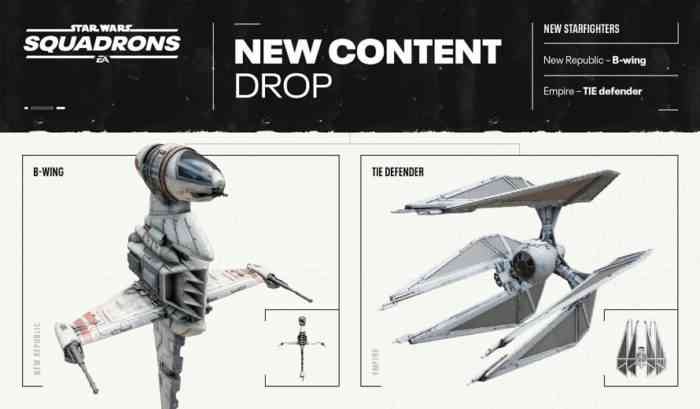 On November 25th, the free content for Star Wars: Squadrons includes the new multiplayer map Fostar Haven, which was featured in the first prologue mission of the single player campaign. There will also be four new components. For Bombers and Fighters, the Boost Extension Kit and Prototype Piercing Torpedoes will be added. Interceptors and Fighters will be getting Ion Rockets. U-Wings and TIE Reapers will be getting Anti-Material Rocket Turrets. In December, the new starship models will be the B-Wing for the New Republic and the TIE Defender for the Galactic Empire. The B-Wing is a Bomber-class ship and and the Defender is a Fighter-class ship.

Along with these new starfighters in the December update, players will be able to set up custom matches. Check out the full Pilot Briefing for all the details and specifications to these updates. Star Wars: Squadrons is available now for PC, Xbox One, and PS4.

Will you be jumping into the new starships next month? Let us know in the comments below.