Combine City-Building With Survival in The Wandering Village

Are You Open to Symbiotic Relationships?

When disaster strikes, life finds a way to survive. Even if seems counter-intuitive at first. In The Wandering Village, players will control a group of desperate people who find a giant, lumbering behemoth straight out of Monster Hunter–and form a sort of partnership with it. This world is infested with mysterious plants which emit toxic as they grow, making the environment hostile to human life. If you want your village to survive, you must build both a settlement on the creature’s back and a bond with your enormous but gentle host. Grow crops, send out foraging missions, fight poisonous spores, and scout your surroundings as the creature wanders through six different biomes, each with their own advantages and disadvantages. But keep in mind that it’s not enough just to build things and scavenge for resources. You must also forge a relationship with the creature, maintain its health, and build its trust. If that bond becomes strong enough, it may even listen to your requests as it travels.

The game will be a city-building and resource-gathering game with mechanics drawn from roguelikes and survival games. There will be a heavy focus on forming a symbiotic relationship–a bond which benefits both you and your massive host–with the creature. Developers Stray Fawn Studio have done a wonderful job creating a beautiful but treacherous environment, lovingly rendered in a mix of 3D graphics and hand-drawn animation. Gameplay will be based ecology and biology, and players will be forced to grapple with many events in order to survive on their post-apocalyptic planet. 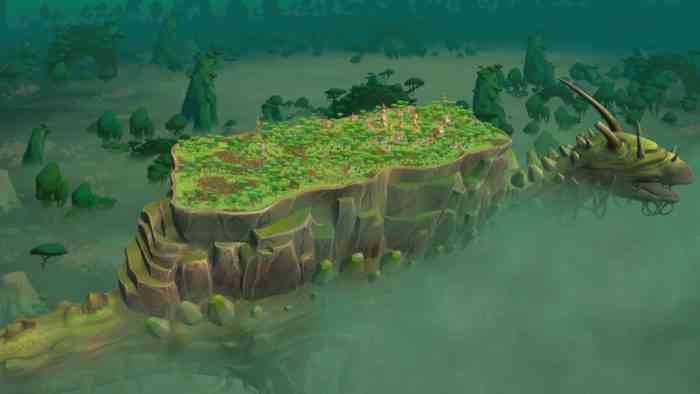 The Wandering Village will be available on Steam early access in late 2021, but it has a Kickstarter available right now. They’ve reached over half their funding goal at the time of writing. Possibly because you can get exclusive pre-launch access to the game. Look, we just really like giant monsters, okay? Don’t judge us.

Are you hyped to build a city on the back of a colossus? Let us know down in the comments, or hit us up on Twitter or Facebook.


Subnautica: Below Zero Review – Not A Moment To Lose

Dungeon and Gravestone Review – Please Sir, May I Have Another
Next
COG Considers How To Not Feel Bad Playing Games That Cape For The Empire
Previous
Rockstar Acquires Crackdown 2 Developer Ruffian Games