It’s almost Halloween, and you know what that means. It means you probably won’t be celebrating it in a way that you normally would in the age of COVID-19, but that’s life. That does not mean you cannot get into the spooky season though. There are a ton of scary games to come out recently like the new Amnesia and Phasmaphobia. Little Nightmares 2 is not exactly about to launch, but Bandai Namco has released a new Halloween trailer to remind us that it is indeed coming. They also give us a peek at what the hardcore fans will get in the Little Nightmares 2 Stay Tuned Bundle. 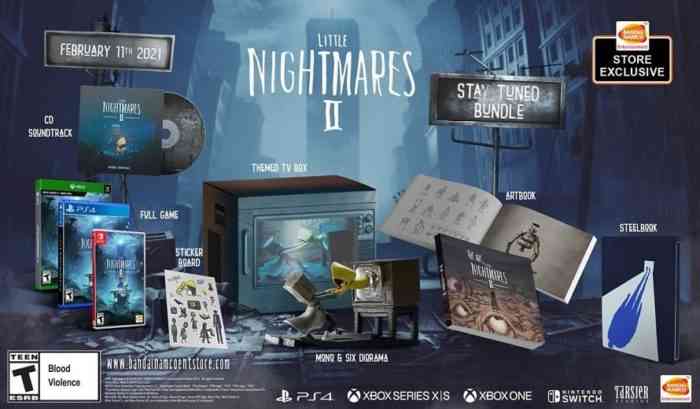 A lot of horror games rely on dark hallways and jumpscares, which do get people going, but the Little Nightmares games do it differently. They show us a whole lot. Your little character is shown to be surrounded by scary stuff, all in full view. And that’s the worst (best) part; it really looks creepy and horrifying. The depictions of people are absolutely terrifying. If you get the Stay Tuned Bundle of the game, you won’t get extra scares, but there are some nifty items and objects for you to gaze over.

This bundle appears to only be available on the Bandai Namco store, but it comes with the full game, the soundtrack on disc, at artbook, a steelbook case, a collection of stickers, and a diorama of Mono pulling Six out of a TV. All of it comes in a decorative TV box. Little Nightmares 2 may not be coming out in time for Halloween, but it will be available on February 11th, 2021 for PC, PS4, Xbox One, PS5, Xbox Series X, and Nintendo Switch.

Are you excited for Little Nightmares 2? Let us know in the comments below.

Total War: Warhammer 2 DLC Comes Out Next Month
Next
Ubisoft Connect Will Offer Digital Rewards
Previous
Pumpkin Jack is Here and He’s Coming For You