A Saw and a Chainsaw

This is something I did not think I would see this week: a Call of Duty trailer that suggests an actual narrative to go along with their multiplayer game and disguises it as a horror game with cameos from popular horror movies. Yet here we are. Temporarily move over, Dead by Daylight; there’s a new game crossing over with scary movies. The Haunting of Verdansk is the new Call of Duty event for Halloween. Players can purchase item bundles with content connected to the Saw and Texas Chainsaw Massacre franchises. 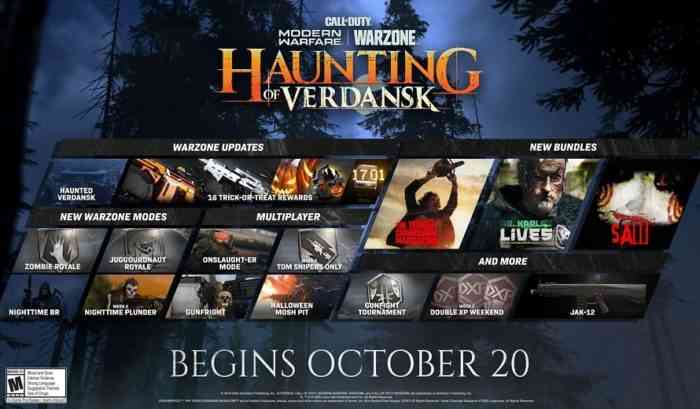 Players in Warzone can participate in a zombie variant of the battle royale called Zombie Royale, where it sounds like players who die may be able to rise again as zombies. Not only that, but they will be able to kill living players and resurrect, getting them back into contention for the win. There will also be a nighttime variant of battle royale and something called Juggourdnaut Royale, which sounds menacing. The update will also bring in a Haunted variant of the map Verdansk.

In multiplayer, players can buy the two bundles mentioned above, as well as some brand new bundles. Dr. Karlov Lives is a bundle based on Verdansk’s own lore. Dr. Karlov was a scientist obsessed with electricity-based experiments. The items in his bundle includes an electric throwing-knife, two weapon blueprints, and a bunch of cosmetics. The Saw bundle gives you a Billy the Puppet skin for Morte, a Phlebotomozier Lethal Equipment piece, whatever that means, a special knife that drills into enemies on impact, and a couple of weapon blueprints. The Texas Chainsaw Massacre bundle gives you a Leatherface skin for Velikan, a blueprint for “Anybody Home?”, which is a hammer/axe melee weapon, an SMG blueprint, and a special LMG blueprint that you can wield like a chainsaw. All the bundles also contain special customization pieces and cosmetics for vehicles. This event runs from October 20th until November 3rd. Call of Duty: Modern Warfare is available on PC, PS4, and Xbox One.

Will you get any bundles for this event? Let us know in the comments below.