We are getting a clearer idea of what the second season pass for Borderlands 3 will be like. Last week, Gearbox spent some time showing us all what the new skill trees for each Vault Hunter will be like. A new trailer showing off those skills is also up. Perhaps the biggest addition of the Designer’s Cut will be Arms Race. As cool as new skills are, nothing beats bullets. We finally have a good look at Borderlands 3 Arms Race. It was kind of mysterious when it was first announced, but now it makes sense. 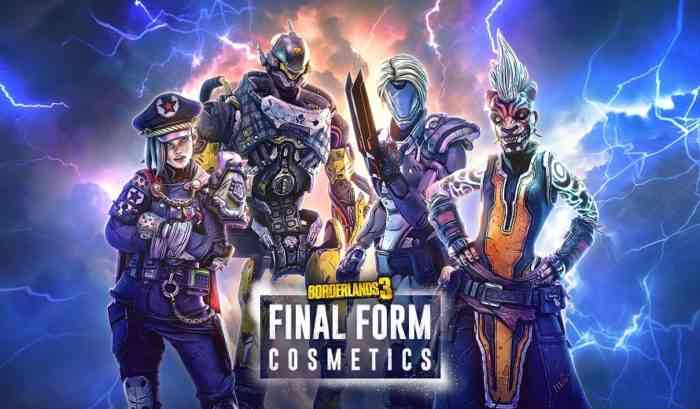 Arms Race was prefaced by Randy Pitchford as not a battle royale, but not that we see some footage, I see why people might have jumped on that. There are similarities, but also clear differences. Players do get dropped into the play area from above and they do scrounge around for weapons, but then they run a gauntlet of enemies to get out with the best guns and loot then can; similar, but different. It will not be PvP like a battle royale. Intsead, players will fight it out against enemies. Skill Trees will be disabled during this game mode, so players will have to rely on their gunplay.

Borderlands 3 Ultimate Edition was also announced for current and next gen consoles. It includes everything; the base game, Season Pass 1, Season Pass 2, Deluxe Edition content, and the Gold Weapon Skin Pack. It also contains the Final Form cosmetic pack, which is a set of brand new character models for each of the Vault Hunters as they would appear in an alternate timeline. They are not just skins. The Final Form pack is also going to be given to Season Pass 1 holders as a thank you. Borderlands 3 is available on PC, Xbox One, PS4, and Stadia, and will be available on Xbox Series X and PS5 when they launch.

Are you looking forward to the Designer’s Cut and Director’s Cut? Let us know in the comments below.