Anniversaries abound as Limited Run, the bespoke online store dedicated to physical media, is celebrating 5 years of bringing tactile love to some of our favourite games. In honour of the Monkey Island series turning 30 years old, Limited Run is releasing a special edition anthology collection with all manner of goodies.

The Monkey Island series, which began in 1990 with The Secret of Monkey Island, is an iconic franchise from LucasArts – masters of the adventure genre. Chronicling the mis-adventures of Guybrush Threepwood as he struggles to achieve fame and fortune through piracy, the beloved series is known for its tongue-in-cheek humour and sometimes fiendishly designed puzzles. 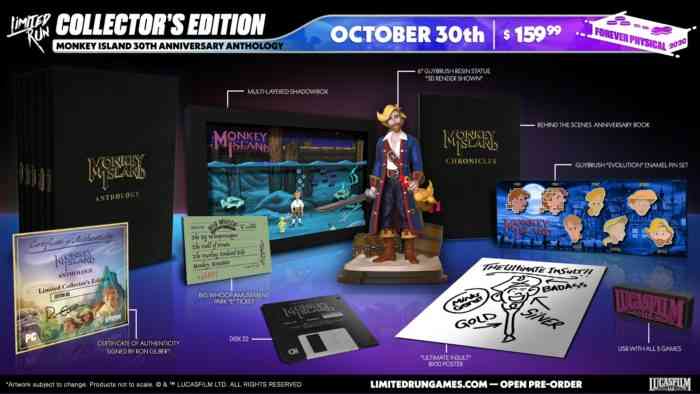 The Monkey Island Anthology from Limited Run costs $159.99 USD and comes in a stylish black box containing a treasure trove of content for fans to dig into. All 5 games in the series are included for PC in a handy LucasArts branded USB drive, however if you’re lamenting the lack of physical disks then worry not as also included is a throwback floppy disk – Disk 22. For the uninitiated, this is a reference to a gag included in the first game where Guybrush would allude to a network of catacombs beneath the island and prompt the player to insert disks 22, 36 and 114!

Also included in the Monkey Island Anthology are; a certificate of authenticity signed by one of the game’s creators, a handsome statue of the roguish hero Guybrush, a set of classy enamel pins showing the evolution of Guybrush’s sprite, and a couple of fun in-jokes for fans of the series. Another classy addition to the anthology is a multi-layered shadowbox featuring a scene of Guybrush under water – really showing off the silly tone of the series and a nice keep-sake for people who grew up with the series.

Limited Run is a wondrous place to visit for us video game enthusiasts, with everything from custom sleeves for your games, to full boxed editions of cult favourites like Oddworld Stranger’s Wrath. With the holiday season approaching, it is a great place to look for that unique gift for the gamer in your life, or just to treat yourself to a piece of gaming history.

The Monkey Island Anthology will be available on October 30th, and ships internationally.

Get a Bunch of Sweet Items in Metroid Dread Special Edition
Next
XIII Remake Delayed for Nintendo Switch, on Time for Other Platforms
Previous
COG Considers The Rise of In-Game Advertisements