Nier: Automata was a huge hit for Square Enix, especially since it was received so well in the West. It’s success opened up a new opportunity for the series to make another pass with some earlier titles. That is probably the driving reason that the previous title in the series 2010’s Nier: Replicant Remaster is coming out. Nier: Automata’s Black Box Edition was a nice treat to collectors, and it looks like Square Enix is doing something similar with the re-release of Nier: Replicant. Nier: Replicant White Snow Edition is jammed with cool stuff. 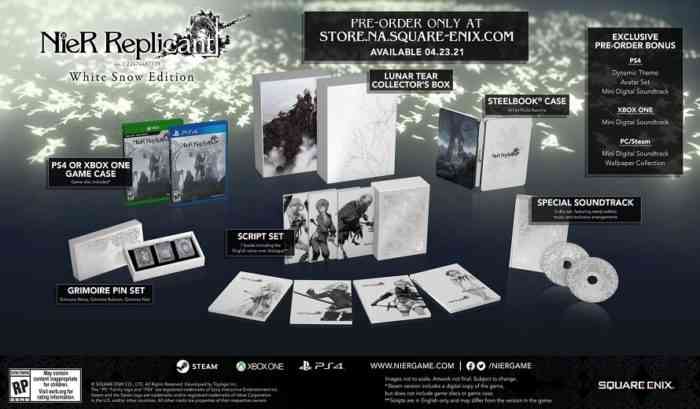 Unlike the Black Box Edition of Nier: Automata, the White Snow Edition does not have any cool statues, but there are some neat memorabilia. First, everything comes in a sweet Lunar Tear collector’s box. It also comes with a steelbook case, a 2-disc soundtrack, and a Grimoire Pin Set of Wiess, Rubram, and Noir. The most/least interesting piece is the 7-volume script of all the recorded dialogue, all of which has been re-recorded in both English and Japanese. There are also “exclusive” pre-order bonuses for each platform, and by that they mean, the different platforms act as tiers of pre-order bonuses.

Which edition will you get and on which platform? Let us know in the comments below.