Yoshinori Ono, executive producer for Street Fighter V, is leaving Capcom after nearly 30 years. Ono posted a heartfelt message on Twitter, thanking his fans and coworkers for both the good times and the bad. While there is some speculation regarding the reasons for his departure, there’s no denying the mark this man left on the fighting game community. 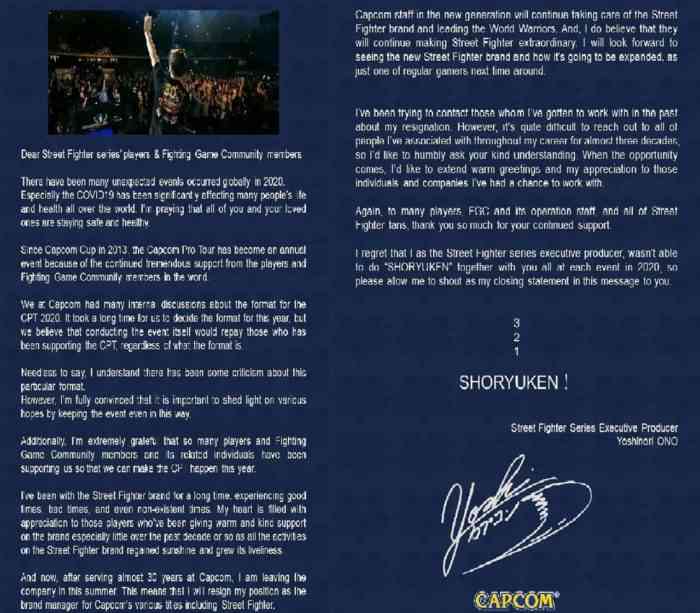 You can read the whole statement just above. Ono makes references to struggles and triumphs, ending his message with a “Shoryuken!” as is appropriate. His push to bring Street Fighter IV back to basics is what revived the flagging franchise back in 2008. There’s also rumors that the performance of successive games might have contributed to his departure?

This is fully some ‘grain of salt’ stuff, rooted in one Twitter user’s pinky swear testimony about its veracity. Apparently “SF6 was supposed to release next year, but it was not received well internally or with testers.” The Twitter thread refers to a team mechanic that the director was focused on. This supposedly lead to Street Fighter 6 getting a new director (or producer? Both?) within the last year. None of this is concrete information, but it lines up nicely with Ono’s departure decision. Regardless, it’s sad to see him go, especially given his tremendous influence over the Street Fighter franchise.

Classic Monster Hunter Games are Over 80% Off, But There’s a Catch
Next
Double Kick Heroes Drops Full Track List
Previous
Akakioga is a Queen and Her Cosplay is Spectacular