The Outer Worlds’ first expansion is just over a week away. Fans of Obsidian Entertainment’s latest RPG have quite a bit to be excited about. For those of you who just cannot wait to see it, Obsidian has released a gameplay preview with The Outer Worlds’ game director Carrie Patel walking us through the first ten-ish minutes of the DLC. The Outer Worlds DLC can be bought individually or through the game’s season pass. Peril on Gorgon takes place on the asteroid called Gorgon, where they player will encounter new marauder variants and perhaps learn about what exactly happened to the people who once lived on Gorgon. 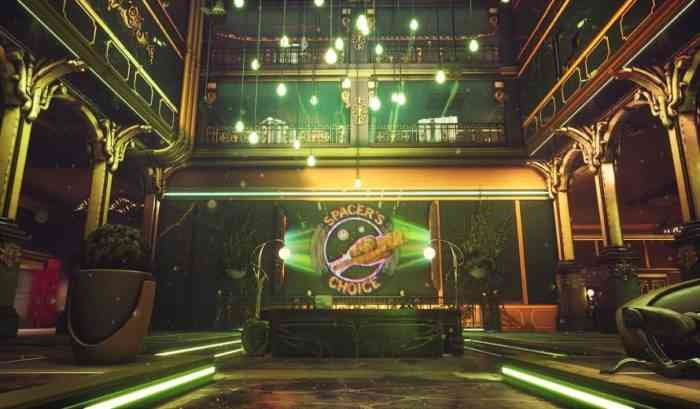 The gameplay begins in Sprat Shack, which is a hub area of sorts. Here, the player can pick up some side quests. We get to check out one of these side quests for an NPC whose husband saves her from the danger of Gorgon by getting her out in his own place. She wants an item of his that the player must look for, but there is more to the story than just finding it. The player can also learn what happened to this man after he and his wife were separated.

While the player is out on this side quest, we see a new melee weapon in use. It has a fiery serrated edge that also draws in enemies upon attacking. Among the deserted areas of Gorgon, that only marauders inhabit, there are cool, glow-y patches of blue grass that can be used to hide in and sneak by enemies. The gameplay preview is limited, but promises a lot for players to discover when the DLC launches on September 9th. The Outer Worlds is out on PC, PS4, Xbox One, and Nintendo Switch, but the Switch version will not get the DLC on September 8th along with the other platforms. We will have to wait for the Switch’s DLC launch date.

Are you getting this DLC? Let us know in the comments below.