I Get First Crack at the Big Guy

E3 2019 took place just over a year ago, but it feels like a lot longer than that. That is when Marvel’s Avengers was first revealed, in the Before Times. A year later, we are getting pretty close to its release in September. We have been shown quite a bit more of the game and there is still more to show. Earlier this week, Crystal Dynamics revealed the date for the follow-up to their first War Table presentation. That will be taking place at the end of this month, which will be followed by the Marvel’s Avengers beta dates. 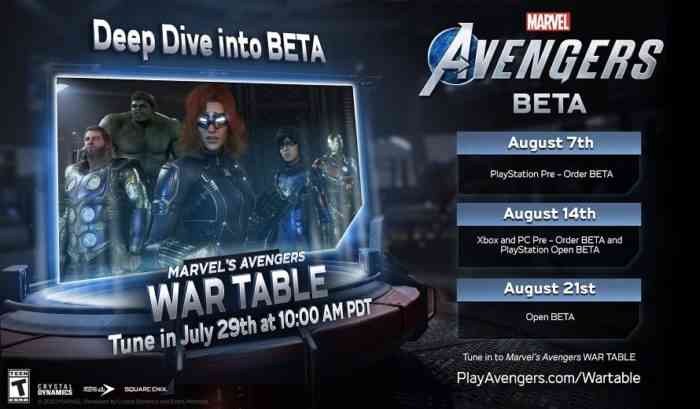 On July 29th, Crystal Dynamics will be holding the second War Table presentation. The next week on August 7th, the closed beta tests will start for PS4 owners. The week after that on August 14th, the closed beta tests will begin on Xbox One and PC. These are limited to those who have pre-ordered the game on their respective platforms. The open beta will also begin on August 14th for PS4 owners. The open beta will commence for all platforms on August 21st. Playing the beta with your pre-order will require a Square Enix Member’s account to verify your purchase.

Details of what is in the beta remains a bit of a mystery. However, according to a statement from the creative director, players will be getting a taste of everything from campaign missions, co-op missions, War Zone, hero progression, and Drop Zone; a new game mode that will be elaborated on during the next War Table. Marvel’s Avengers will be out on September 4th for PC, Stadia, Xbox One, and PS4.

Will you be taking part in the beta? Let us know in the comments below.

A Second Guilty Gear Strive Beta Announced for Next Month

Check Out the MCU Skins Leaked in Marvel’s Avengers Bug
Next
Dr. Disrespect Discusses His Removal From Twitch, Sorta
Previous
Ninja Looking for a New Home After Mixer Shutdown