Some people like to celebrate their birthdays for an entire week or even month, which is a bit much, but Gearbox is going to be celebrating the first anniversary of Borderlands 3’s release for nearly two whole months. And while yes, this is also a bit much, no one has proved it quite as much as Borderlands that there is certainly enough loot to go around. It’s all about loot; always has been and always will be. There will be mini Borderlands 3 events starting next week until September 10th. 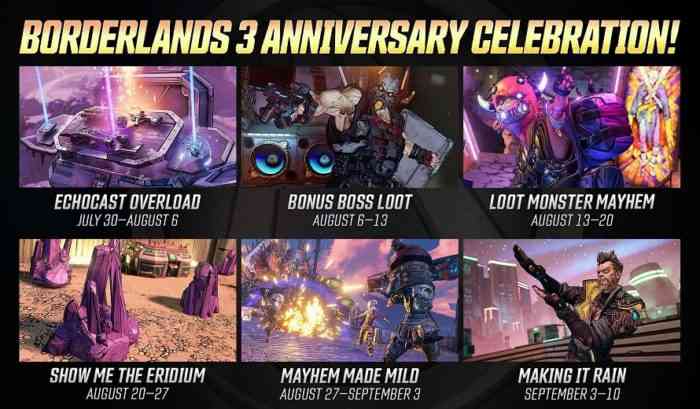 Some of these mini-events are returning from earlier Borderlands 3 appreciation weeks, such as the event from July 30th to August 6th: ECHOcast Overload. During this time, players will be able to get better loot from participating in Rare Chest Events from the ECHOcast Twitch extension. From August 6th to 13th, Bonus Boss Loot will be active, where bosses have increased Legendary drop rate. From August 13th to 20th, Loot Monster Mayhem will have more enemies that specifically drop a ton of loot. During the week of August 20th to 27th, Show Me the Eridium returns with increased Eridium drops and Eridium discounts. A new one, Mayhem Made Mild, takes over from August 27th to September 3rd. In Mayhem Mode 2.0, all modifiers will be taken from the Easy pool, making Mayhem Mode easier to get better rewards in. The last week, from September 3rd to 10th is Making It Rain. Simply put, more cash drops.

If you are a Borderlands fan, these next couple of months will be the best chance for you to do as much grinding as possible. It’s not like there are a ton of other games out this Summer that will be competing for your attention, right? Borderlands is out now on PC, Stadia, PS4, and Xbox One.

Will you be celebrating the Borderlands 3 birthday? Let us know in the comments below.