The whole world has its eye on the United States right now. Protests and demonstrations are being held in every major city in America, some turning violent. These protests were sparked by the murder of George Floyd by police in their custody. There are many people, many communities in pain right now and it may feel wrong to celebrate other things during this time. That is why many publishers and developers in the video game industry have made statements in support of black communities. While words may have little impact in the grand scheme of things, it is reassuring to know that we see each other and we care. 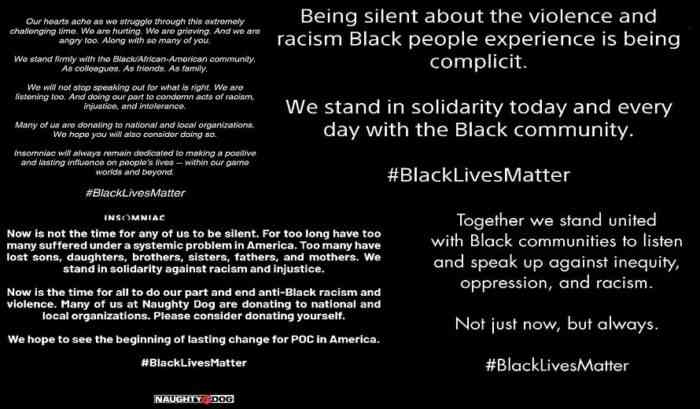 Above we have pictured the messages of support from (left to right, top to bottom) Insomniac, Sony, Naughty Dog, and Bethesda. They denounce racism and violence, address systemic injustice, and plead for support to national and local organizations. They all also include one thing: #BlackLivesMatter. While this hashtag and the organization has existed for years, it is refreshing to see so many companies in the gaming industry uniting under this one banner.

These messages also come coupled with announcement and reveal delays. EA has delayed its first look at Madden 21 and Sony delayed the June 4th PS5 games event. Other industries have taken similar stances. For instance, the music and entertainment industry has called for a blackout or halt in productions and events, some with the hashtag #TheShowMustBePaused.

How are you showing your support for communities of colour? Let us know in the comments below.