Borderlands 3 Event Revenge of the Cartels Is Live and Stellar

Along with Mayhem 2.0, a new seasonal Borderlands 3 event launched yesterday called Revenge of the Cartels. As with the previous events, this one ties in to Maurice, Sanctuary III’s resident inter-dimensional saurian. He is in deep with the wrong crowd. As he explains, to better understand humans, he plays a high-stakes poker game and wins. It is the saurian custom to eat the loser, so he devours his opponent and begins a feud with the cartels. Now, it is the Vault Hunters’ job to take out cartel operatives to find their hideout and kill the leader. 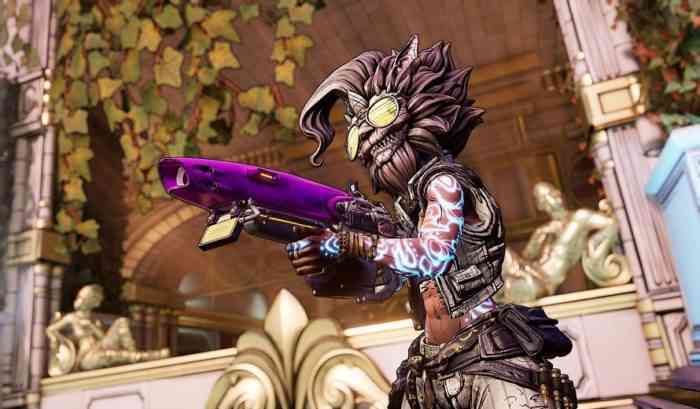 Revenge of the Cartels is closer to the Bloody Harvest event than the Broken Hearts event. Once finding the mission items, Maurice will teleport you to the Villa Ultraviolet, where Joey Ultraviolet has holed up in a totally not-Scarface mansion. The mansion will be filled with one of three cartels, made up of various types of enemies and with loot unique to that cartel. The residing cartels change every time you enter the villa. Fight your way through Villa Ultraviolet, get loot; rinse and repeat.

For Vault Hunters that want all the rewards associated with the event, there are 18 challenges to complete, which involve killing certain named enemies in specific ways, solving a secret puzzle in Villa Ultraviolet, and killing enemies on Mayhem Mode. Completing challenges will earn players 5 tiers of rewards, which include a ECHO skin, weapon trinket, room decoration, Vault Hunter head, and Vault Hunter skin. Revenge of the Cartels runs from April 23rd to June 4th. Borderlands 3 is available for PC, PS4, Xbox One, and Stadia.

Will you be fighting the cartels? Let us know in the comments below.