Borderlands 3 Event Brings Mayhem on Tour with Loot the Universe

With Borderlands 3 revolving door or events, it is hard to keep track of all the ways we are able to score the best loot. Even if you do not keep track, if you just play regularly, you will probably end up taking advantage of these events half the time. Recently, the Co-op Loot Drop event ended, and that means that a new Borderlands 3 event must begin. Loot the Universe is a month long event made up of mini-events taking place across the galaxy, on a different planet each week. 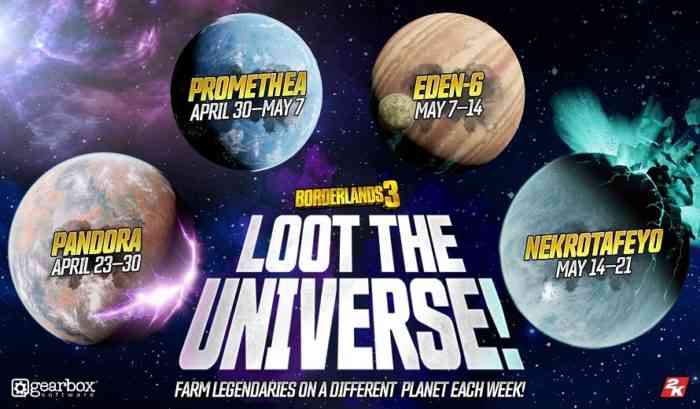 Between April 23rd and 30th, Pandora will be shelling out more Legendary items than usual. Between April 30th and May 7th, the same goes for Promethea. The following week between May 7th and 14th, Eden-6, and then Nekrotafeyo between May 14th and 21st. While you could just run around and shoot everything you see, you can also hunt loot more strategically. During each of the planets’ spotlight weeks, the different zones of that planet will drop an increased type of weapon. For example, on Pandora, Cathedral of the Twin Gods might drop more Legendary snipers and Carnivora might drop more Legendary pistols.

Of course, Loot the Universe is not the only thing going on in the Borderlands. The seasonal event Revenge of the Cartels is also running until June 4th, so while you are looking for cartel operatives, you can hunt on the planet with increased Legendary drops. If you want an extra challenge and even bigger chances of Legendary loot, turn on Mayhem 2.0, which also launched last week. Borderlands 3 is available now on PC, Xbox One, PS4, and Stadia.

Will you be farming for Legendaries? Let us know in the comments below.