Assassin’s Creed fans have been given a tasty treat today. The cinematic trailer for Assassin’s Creed Valhalla and some of the pre-orders have gone live. Though you may not be able to get all of the pre-order packages today, you can view them all even before you can buy them. There are a bunch of purchasing options, both digital and physical, as well as through different platforms and services. On top of the Xbox One and PS4 options, PC players can get the game through the Epic Games Store, the Ubisoft Store, and UPlay+. 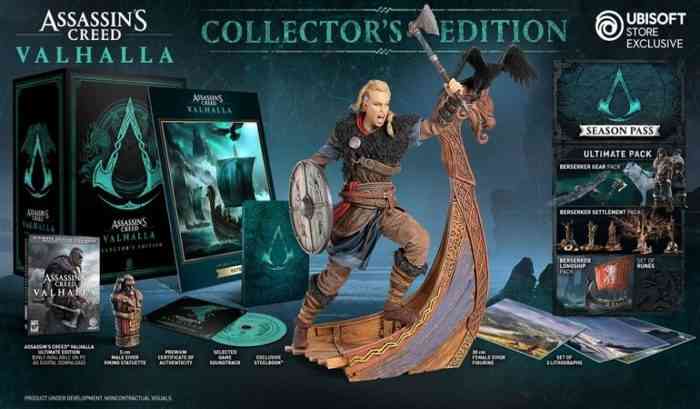 The Collector’s Edition comes with the cool physical stuff. In addition to the base game, season pass, and Ultimate package, it comes with a viking statue of the male Eivor, a Premium Certificate of Authenticity, the game soundtrack on disk, a set of 3 lithographs, a steelbook (unclear if it is the same steelbook as with the other edition), and a 30cm statue of the female Eivor on a viking boat bow with Odin’s raven. All of this comes in a Collector’s Edition box. None of the prices on any of these editions are available yet. Assassin’s Creed Valhalla will be coming out during the holiday season of 2020 on PC, Stadia, Xbox One, Xbox Series X, PS4, and PS5.

Which edition do you have your eye on? Let us know in the comments below.