Being a collector of pretty much anything is a pricey hobby, but then again so is gaming. Sometimes, those hobbies crossover with Collector’s Editions of games and memorabilia. One such example is with 2018’s Marvel’s Spider-Man. One of the most successful superhero games and and PS4 exclusives. Marvel partnered with PCS Collectibles to sell a $1,100 USD Spider-Man statue based on the Advanced Suit from the game. You’d be to find anyone who has that kind of disposable income for a statue. However, there is also an option for someone that is not willing to spend that much, but still wants their own statue. 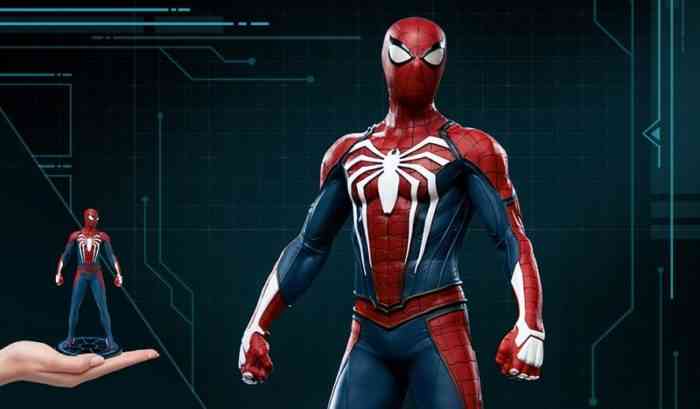 While the $1K+ statue has Spider-Man leaping from an attack by Mister Negative stands at 2′ tall, the less expensive one does not take up as much room and shows a more standard pose. This one has Spider-Man, also in the Advanced Suit, standing straight up upon a circular stand. It stands at just over 7″ with a diameter of 3.4″. The best part about it is the price. It will run you just $84.99 USD. That’s chump change compared to the $1,100 statue. Not only that, if you were to buy both of them, the smaller alternative would ship much sooner.

The $85 one will be shipping between November 2020 and January 2021, while the $1,100 ships between January 2021 and March 2021. You can get either of them on Sideshow.com, but if you are like the Peter Parker of collectors, you’ll probably go for the smaller one. Only Tony Starks of collectors can realistically get the big one. Marvel’s Spider-Man is available exclusively on PS4.

Which one would you rather have? Let us know in the comments below.