There is an ancient proverb: “Give man a canvas, and there will be dicks.” This is certainly true in video games. Anytime a player is given the opportunity to design something, they will make a dick. Animal Crossing: New Horizons has one such feature and the community did not disappoint. Prior to the game’s release, a trailer was made to focus on the customization and design opportunities in the game and players began working on their pixel art. It just goes to show you, even something as wholesome as Animal Crossing has room for sexy stuff. 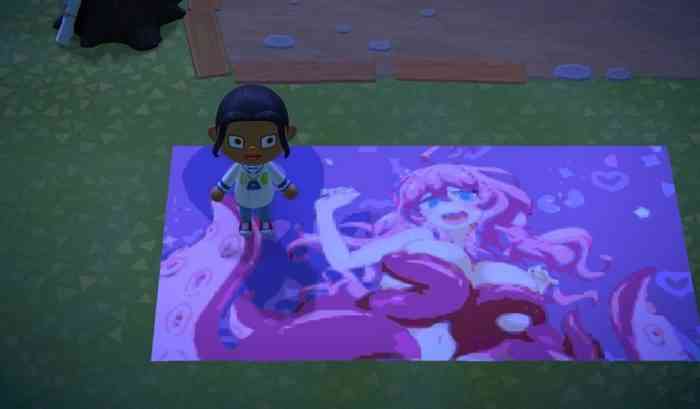 Examples of adult art in the game range from shapes in the geography of the island, to paintings, to wallpaper, to custom clothing. The game allows to to terraform your island to some extent, but one player’s random island gave her a dick-shaped pond. Upon further inspection, the shaft was actually a waterfall, later named “Cock and Balls Falls”. Others took a more proactive approach and made their own designs. Such examples include a Nier Automata 2B dress, dick wallpaper, and tentacles *loving* a lady.

One of the first decisions a player makes in the game is naming their island, and because there are so many clever people out there, we quickly found out that you can named it Pen Island. Animal Crossing: New Horizons is out now exclusively on Nintendo Switch.

What kind of things have you made on your island? Let us know in the comments below.